‘Justices must pin their ruling on history and the people’

‘Justices must pin their ruling on history and the people’ 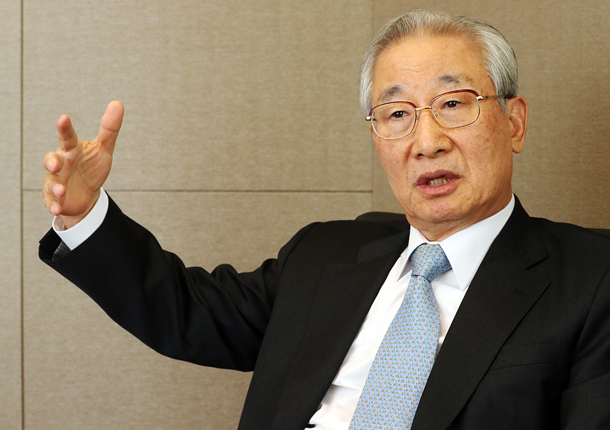 At the top floor of the Constitutional Court in Jongno District, central Seoul, there are nine engravings of the rose of Sharon, the nation’s flower, symbolizing the court’s nine justices. But at the moment, only eight are presiding over the impeachment trial of President Park Geun-hye.

On March 13, Justice Lee Jung-mi will retire, leaving the court shorthanded with just seven remaining. In a national crisis, the court is already violating Article 111, which stipulates the presence of nine justices. “The current situation is reminiscent of the end of the Joseon Dynasty,” said Lee Kang-kuk, former chief justice of the Constitutional Court. “Whether the court upholds or rejects the impeachment motion, it should make a swift ruling in order to resolve national division.”

During an interview with the JoongAng Ilbo, Lee expounded on the meaning of the impeachment trial and how to overcome the court ruling’s aftermath. For the most part, he has refused interviews since he was appointed to lead the Constitutional Court in 2013 and even after retiring — until now. In accepting the JoongAng Ilbo’s interview request, Lee said, “As there is so much ‘fake news’ including imprecise information and data even as the impeachment trial is coming to an end, I felt I had to say something.”


Q. The Constitutional Court is presiding over the impeachment trial of President Park with only eight justices. What do you think about this situation?

A. As an impeachment trial is very grave and important, it is fundamental that a nine-justice court deliberate and make a ruling. In this case, there is not just one or two tricky things. An abnormal governance system is operating with Prime Minister Hwang Kyo-ahn as acting president, and the Constitutional Court is running abnormally with eight justices after Chief Justice Park Han-chul retired at the end of January.

According to the Constitutional Court Act, if at least seven justices are present for an impeachment trial, they can deliberate on the case, and if at least six justices approve the motion, the impeached president will be removed from office. Consequently, the court can’t but make a ruling with the eight justices. Whether rejecting or approving the motion, it is appropriate for the court to make a swift ruling as soon as possible to resolve the vacuum in state leadership and national turmoil. They must make a ruling before March 13. When they are caught in a difficult situation, they must walk the righteous and just path.


Are you saying a swift ruling is more important than procedural justification for the impeachment process?

Of course, it would be great if the court could examine and analyze all the reasons for impeachment, such as the eight constitutional violations and five breaches of law. However, while the ruling is delayed, it is only the Republic of Korea and its people who will be impaired. Japanese Prime Minister Shinzo Abe flew over to U.S. President Donald Trump right away and held a joint press conference as soon as North Korea launched an intermediate-range ballistic missile. In the meantime, what are we doing?

The current situation reminds us of the end of the Joseon Dynasty. It was a hundred years ago when Joseon was so swayed by four great powers that it could not function properly as a state in the international arena. I believe such an unfortunate history will not repeat again. But is it good for us if we just wait at the threshold of advanced countries and see what America and Japan are doing?


What will be the problem if seven justices make a ruling after the acting chief justice, Lee Jung-mi, retires on March 13?

No matter what decision the Constitutional Court hands down, it is obvious there will be a dispute on the ruling’s legitimacy. It means the ruling could be distorted. Accordingly, I worry about the serious national division that the ruling will bring about.

Even if Supreme Court Chief Justice Yang Sung-tae appoints a new justice for the Constitutional Court, it takes a long time for the new appointee to undergo a confirmation hearing and get endorsement from the National Assembly. Ruling and opposition parties will assess the changes with fiery disputes, and agreement between the parties will not be easy. Even if a new justice is appointed, he or she will have difficulty in understanding the case for some time.


The Constitutional Court is apparently nearing the finish line. Is it possible for the court to make a ruling before March 13?

If the court closes hearings, it usually takes two to four weeks for the justices to go through deliberations before making a final ruling.
However, in the event of a high-profile case, it depends on the court’s decision. A deliberation begins at 9:30 a.m. and sometimes goes past 10 p.m. If a verdict is reached during deliberation, the justices begin to write the ruling. If confidentiality is necessary or if some justices dissent, the chief justice opens an emergency deliberation session just before writing the final ruling.


When rejecting the impeachment motion against former President Roh Moo-hyun, what was the criteria for seriousness in constitutional violations?

That is not quantitative. The justices will deliberate on the case after comprehensively examining many precedents from domestic and abroad, based on their long experience and legal knowledge.


Analyzing the propensities of the justices and where they’re from, some people predict the Constitutional Court will reject the impeachment motion. What is your opinion on the prediction?

The ruling on the current president’s impeachment trial will be recorded in history for generations. Future generations will read the ruling in history books. I think the justices will look squarely at how they will be judged in history and will hand down the best decision as they examine the people’s opinion. The justices of the Constitutional Court should have only two things in mind at this grave juncture: history and the people.


Some people say they will disregard the Constitutional Court’s ruling if they are not satisfied with it.


Public opinion is severely divided and becoming more contentious. How do you think we can resolve this extreme conflict?

These days, looking at the [anti-Park] candlelight protests and the [pro-Park] national flag protests, the ideological, generational and regional divide has become more concerning. Going further, there are calls for the dissolution of the National Assembly as people have doubts on the effectiveness of representative democracy. Social conflict and confrontation is not always harmful. The conflict between conservatives and progressives contributed greatly to human history’s development.

But I have to look directly at Korean reality. Ideological divides and confrontation now impede national development. It is merely a pathological phenomenon. Political leaders must display mutual understanding and devote themselves to converting the conflict into energy to develop the nation. They should not misappropriate the conflict to make political gains.