Seoul urges Kim Jong-un to be tried at ICC

Seoul urges Kim Jong-un to be tried at ICC 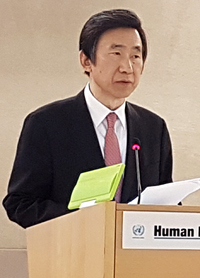 The statement was relayed in the 34th session of the United Nations Human Rights Council in Geneva, Switzerland.

Highlighting that eight North Korean suspects in the assassination of Kim Jong-nam held official passports issued by the North Korean government, and that the victim was killed with a chemical substance classified as a weapon of mass destruction by the UN, Yun told the 47-member council they should act “individually and collectively” to block the North Korean regime from causing a “much bigger calamity.”

“All these acts constitute a serious violation of various international human rights instruments to which North Korea is a party,” said Yun. “It is also an outright challenge to the rules-based international order.”

Yun furthered that it was “high time” to end impunity for human rights violators, including the North’s leadership. At one point, he mentioned that “several hundred high-level officials have been openly or extra-judicially executed” in North Korea during Kim Jong-un’s reign, not to mention “countless ordinary people.”

Pyongyang’s state-run media, Kim Jong-un’s mouthpiece, has yet to respond to Yun’s remark.

Seoul’s effort to add weight to long-running criticism of Pyongyang’s human rights abuses came two weeks after Kim Jong-un’s half brother was killed in a busy Malaysian airport on Feb. 13 and less than five days after the North’s Korean Central News Agency accused the South of drumming up a “conspiratorial racket” around the murder case - while refusing to admit the killed man was its leader’s half brother.

The Organization for the Prohibition of Chemical Weapons, to which South Korea is affiliated but North Korea isn’t, said in a statement that the use of the nerve agent VX was “deeply disturbing” and that it stood “ready to provide expertise and technical assistance” to Malaysian authorities in their probe.

Khalid Abu Bakar, Malaysia’s inspector-general of police, said Tuesday they were “willing to share” evidence on the fatal substance if Malaysia’s Foreign Affairs Ministry gave the green light, according to The Star, a news outlet in Malaysia.

“Our investigation into the murder is transparent and thorough, so there is no reason for us not to share information on the VX nerve agent,” he was quoted as saying.

The ministry said Ri was planned to meet with China’s Foreign Minister Wang Yi. A diplomatic source told the JoongAng Ilbo, an affiliate of the Korea JoongAng Daily, that Ri made the visit to discuss several bilateral issues, including China’s recent decision to suspend all imports of North Korean coal through the end of this year.

Ri could also seek help from China in the murder case, or at least provide an explanation, the source said.

It remains unclear exactly how the killing of Kim affected China, who gave protection to him and his family in Beijing and Macau. But North Korean experts believe that China’s leadership could have felt a sense of betrayal because it saw him as some sort of a “Plan B” in case anything ever happened to Kim Jong-un, according to an official from South Korea’s Ministry of Unification, which oversees inter-Korean relations.

Ri’s visit is the first known visit of a senior North Korean official to China since Ri Su-yong, vice chairman of the North’s Workers’ Party, traveled to Beijing in May 2016. Ri Dong-il, a spokesman for the North’s Ministry of Foreign Affairs, who formerly served as deputy ambassador to the UN, led a delegation to Kuala Lumpur Tuesday and said he would talk with Malaysian authorities to release North Korean suspect Ri Jong-chol and Kim Jong-nam’s corpse.

Malaysian police have adamantly refused to give up the dead body, saying Kim’s next-of-kin must claim it. A family member has yet to come forward. It is still unknown how the suspects were able to smuggle the VX nerve agent into Malaysia. South Korea’s National Intelligence Service chief Lee Byung-ho said Monday that a “diplomatic pouch” could have been used, referring to sealed packages that are used by foreign government officials to transport official material.