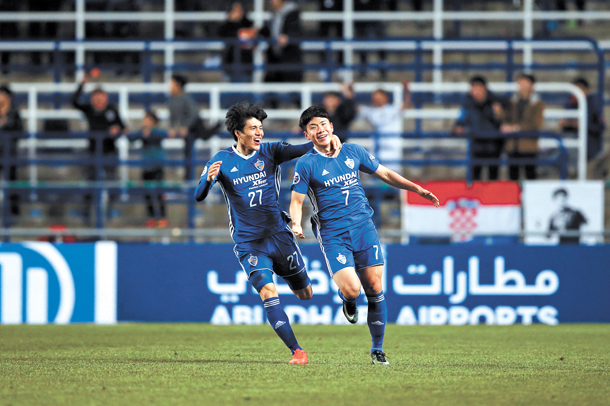 Ulsan beat the Brisbane Roar of Australia 6-0 in their second Group E action at the Asian Football Confederation (AFC) Champions League, thanks to Croatian attacker Mislav Orsic and Kim In-sung who both scored twice at Munsu Football Stadium in Ulsan.

The K League club now has one win and one loss in Group E, where they are also paired with the Kashima Antlers of Japan and Muangthong United of Thailand.

Ulsan, the 2012 AFC Champions League (ACL) winners, lost to Kashima 2-0 on the road in their group opener last week.

The hosts opened the scoring in the 10th minute when Kim’s left footed shot found the net. Orsic doubled the lead three minutes later as he started dribbling from the center circle and went on to beat goalkeeper Jamie Young with his right-footed effort.

In the 34th, Ulsan left back Lee Ki-je’s penetration into the box was denied by Brisbane’s Cameron Crestani, but the Australian center back’s poor clearance landed in Orsic’s path. The 24-year-old attacker then fired a right-footed shot to make the score 3-0.

In the 55th, another Croatian forward Ivan Kovacec got on the score sheet. Former Brisbane player Dimitri Petratos sent a cross from the left flank and Kovacec tapped the ball with his left foot. His shot took deflection from Crestani, but Young wasn’t able to make a save.

Kim, a former CSKA Moscow player, dribbled past Jade North and grabbed a brace with a powerful strike in the 68th.

Second half substitute Lee Jong-ho then rounded off the scoring in the extra time with a header off Richard Windbichler’s cross.

Ulsan will next meet Thai champions Muangthong United at home on March 14.’

Elsewhere, FC Seoul suffered a humiliating loss in Saitama, Japan, as they fell to Urawa Red Diamonds 5-2 in their second match in Group F.

Seoul, the reigning K League champions, gave up five goals in the first half.

Yuki Muto first put Urawa on the board just nine minutes after kick off and Tadanari Lee doubled the lead for the 2016 J1 League runners-up in the 11th.

Seoul’s Park Chu-young cut the deficit to 2-1 with his curling free kick in the 14th, but Urawa furthered their lead just a minute later with Takahiro Sekine’s right foot strike.

Seoul, last year’s ACL semifinalists, then were punished by Tomoya Ugajin in the 21st and Yoshiaki Komai in the 45th.

Montenegrin striker Dejan Damjanovic scored a consolation goal for Seoul in the 92nd.

This is Seoul’s second straight loss in Group F. Last week, they picked up a 1-0 defeat against Chinese side Shanghai SIPG at home.

Seoul will next face Western Sydney Wanders of Australia at Seoul World Cup Stadium on March 15.

Ulsan and Seoul are two of the four Korean teams at the ACL this year. Suwon Samsung Bluewings and Jeju United will see ACL action on Wednesday.

Jeju, No. 3 in the domestic league last year, will face Gamba Osaka on the road in their Group H action. Jeju suffered a 1-0 loss to Jiangsu Suning FC of China in their previous match, while Gamba blanked Adelaide United of Australia 3-0.