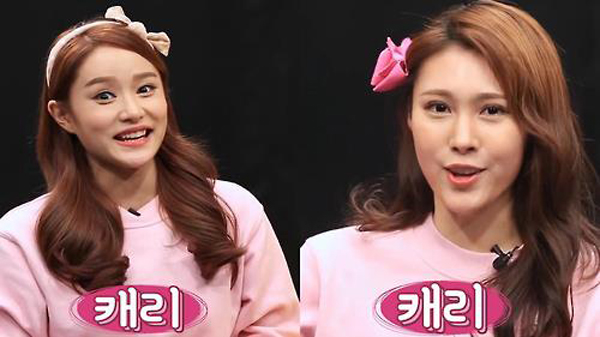 Kang Hye-jin, left, who played the original Carrie character on the popular YouTube channel Carrie and Toys, and Kim Jung-hyun, right, who will replace Kang as the channel’s main host in the near future. [YONHAP]

The “president” has quit. And no one saw it coming. Thousands of followers, young and old, found themselves emotionally lost, not knowing how to deal with the sudden void inside that was once occupied by her.

No. The impeached South Korean President Park Geun-hye isn’t the person we are talking about. It is Kang Hye-jin, the so-called “Carrie eonni,” or Sister Carrie, who is also referred to as “Ca-tongryeong,” or President Carrie, among her many fans.

The 27-year-old star of the popular YouTube channel Carrie and Toys sent shock waves among young toddlers and parents after it was announced in mid-February that Kang was leaving the channel.’

So, what exactly is Carrie and Toys? It’s a popular YouTube channel run by CarrieSoft Co., a South Korean media company that specializes in online video content for children, launched in August of 2015.

The YouTube station, which had humble beginnings, became a go-to place for many young children and parents from a rather simple idea: reviewing toys and showing kids how to play with them.

Kang, who plays host Carrie, and her show gained a sizable following, becoming the number one South Korean YouTube channel in terms of total video views and ad revenues in 2016.

According to the state-run Korea Radio Promotion Association, Carrie and Toys racked up some 660 million views and earned 792 million won (US$700,309) in YouTube ad revenue last year. The account has some 1.4 million subscribers.

The company has also secured up to 5 billion won in investment from several major entities, including NHN Entertainment.

The channel’s ascent came along with the rise in the adoption rate of smartphones in South Korea, which stood at 88.5 percent last year.

With the expansion of families with both parents working, an increasing number of households have become dependent on smartphones and other internet-connected devices for everyday tasks, including babysitting.

On the outside, the Carrie machine was enjoying a steady growth. But things were more complicated on the inside.

On Feb. 17, Kang, whom to many was the quintessential Carrie, delivered the news that she was leaving the show and introduced her replacement, 24-year-old Kim Jung-hyun.

Kim will start her Carrie run sometime next month, according to CarrieSoft.

Nevertheless, the breakup wasn’t easy for loyalists, many of whom lamented and criticized Kang’s abrupt departure.’

The video clip in which Kang said goodbye was disliked more than 105,000 times on YouTube, an indicator of the level of emotional attachment fans and parents have to her.

Speculation swirled that Kang may have been fired because of weak foreign language skills, which the company refuted.

One commenter wrote, “What the heck. Carrie, after building the channel, winning more than 1 million subscribers and earning money, now leaving?”

Anecdotes of children bursting into tears from Kang’s departure swirled among parent communities on the Internet.

“It’s hard to explain the situation to the child, since I myself was also kind of shocked by the news,” said Park.

An official at CarrieSoft told Yonhap News Agency that Kang voluntarily decided to leave the company to pursue a career in broadcasting.

“Despite our efforts to retain her, Kang decided to leave the company to achieve her dream as a TV personality,” Yoon Dal-yun, vice president of CarrieSoft, said. Yonhap