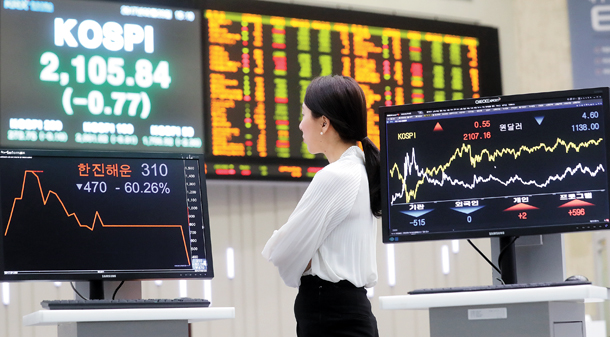 A staff member at the Korea Exchange checks out the share prices of Hanjin Shipping on Feb. 23. The company will be delisted from the exchange on March 7. [YONHAP]

On an online stock investment community Friday there were several postings related to trading Hanjin Shipping shares. One of the posters claimed to have purchased 300,000 shares of the defunct shipping company for 197 won (17 cents) per share. An hour later, the stock price rose 6.6 percent to 210 won.

On the second day that investors were allowed to unload their stock in the shipping company, 81 million shares worth 17.1 billion won were traded on the market. The share value of the shipping company, which started the day at 283 won per share ended up 44.19 percent lower at 173 won on Feb. 24. A day earlier, shares ended at 310 won.

The trend continued for two more trading days. By Feb. 28, the stock value of Hanjin Shipping ended at 100 won, plummeting 87 percent from 780 won on Feb. 2. Earlier in the session, the shares at one point rose as much as 10.79 percent.

It was the first trade of the shipping company’s shares in 20 days since the Korea Exchange halted trades on Feb. 2. The shipper, whose bankruptcy became official Feb. 17, was given seven trading days for investors to sell off the remaining shares, before Hanjin Shipping was delisted from the Kospi market. 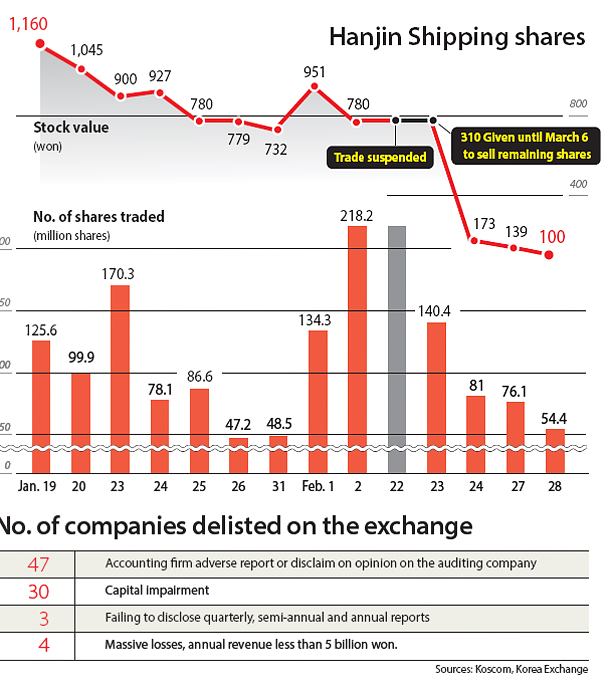 The lower the price fell, there were more postings that encouraged investors to buy. Some of the postings claimed that once the company starts selling off its remaining assets, the value of the stocks could quadruple to as much as 500 won.

The sale is the last opportunity for shareholders to recollect as much of their investment as they can. An investor can sell the shares once every 30 minutes up to 14 times a day.

One of the companies that profited largely from a post-bankruptcy sale was Seunghwa Premium Construction, which was delisted from the secondary Kosdaq in January 2016. A day after investors began to sell shares, the construction company’s stock value surged 184.7 percent.

When it was delisted from the stock market, Seunghwa’s market capitalization expanded from 4.2 billion won to nearly 1.5 trillion won, rising to the 11th spot on the Kosdaq. However, the stock that once was a high as 40,000 won per share ended at 2,910 won by the time it was delisted. Retail investors that failed to sell their shares at the appropriate time suffered major losses.

Companies facing delisting often see their share values fluctuate until the last trading day as some investors are betting that they can make a huge fortune on a last-minute trade.

“When you look at the pattern of such stocks, it is the same as a bubble that blows up and then pops,” said a broker, who requested anonymity. “There’s a belief among investors that when they purchase the stocks, the bubble won’t burst. It’s like passing on a ticking time bomb.”

Some liken the investment to a group of moths heading toward a light even though they know they will die from the flame.

Speculators purposely purchase the stake to drive up the value and then sell off the stakes at a higher price, fueling purchases of shares that are soon to be delisted.

In the process they spread false information including the company’s plans regarding selling off its assets to draw in more investors.

But in the end retail investors fall victim to such speculations.

On average the share values of the 16 companies that have participated in such share sales since the second half of 2015 fell 85.4 percent.

Most of the companies are delisted from the exchange when the financial situation is at its worst. Most occur between March and April when companies announce their earnings performances.

There are 14 criteria for companies to be removed from the stock exchange. The most common reasons is the accounting firm auditing the company releases an adverse report or opinion about the company, which indicates the company’s insolvency could be expanding or its total assets are worth less than the company’s stock.

In fact in the last five years, 47 companies were forced off the stock exchange because of their accounting firm’s adverse report or disclaiming its opinion, which is more than half of the 84 companies that were delisted. Thirty companies delisted were in a state of capital impairment.

Many retail investors are hoping that the company will compensate the shareholders once the company is delisted from the exchange and it sells off whatever assets remain.

“However, in many cases companies that are delisted from the stock market suffer from capital impairment, which means even after the remaining assets are sold there’s not much left to give the shareholders,” a KRX official said.

In some cases, companies that were removed from the stock exchange stabilize and successfully reenter the stock market.

The former Dongyang Steel, which was rebranded as Aluko, Jinro and Mando, is an example.

But getting relisted on the stock market is harder than companies seeking their first IPOs as it takes a company several years to succeed.

If a company is successful in getting relisted, the investors that bought the company’s shares before delisting could enjoy a huge profit.

Some of the companies’ stocks are traded over the counter when they are expected to maintain their competitiveness even when they are delisted.

Analysts say there is a need to improve market regulations to prevent such shares that are being cleaned up from being manipulated by speculators.

“There could be a regulation where there’s a limit to how high such stocks could rise while keeping the lower limit limitless,” said Lee Hyo-sup, Korea Capital Markets Institute researcher. “Retail investors shouldn’t be allowed to make new purchases on companies that were delisted from the stock market because they went bankrupt like Hanjin Shipping.”