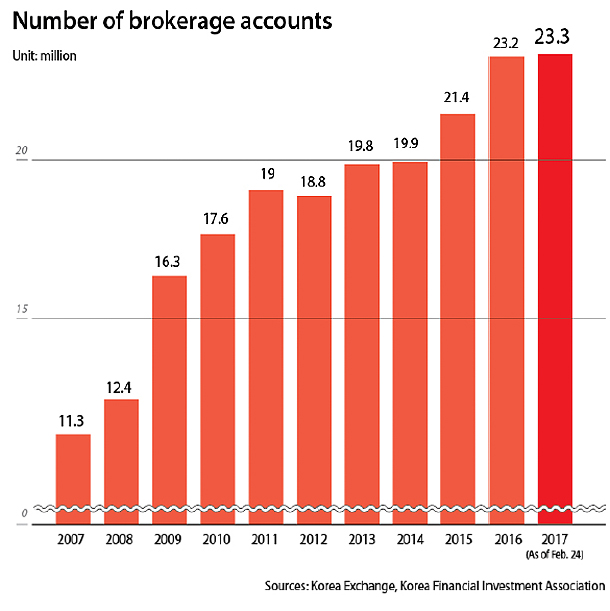 The number of brokerage accounts at licensed securities firms in Korea hit a record high last month, buoyed by the public listing of new companies and improved performance in the country’s main bourse, the Kospi, new data shows.

The number of active brokerage accounts - which include accounts with over 100,000 won ($87) in financial assets and transactions in the past six months - was 23.3 million, according to data released Wednesday by the Korea Exchange and Korea Financial Investment Association. That means just under a majority of Korea’s population of 50 million have made investments in the stock market.

Stock investment has maintained an upward trend in the past few years, with the past two years seeing sharp increases. Last year saw the biggest rise in new accounts since 2009, with over 1.7 million opened. The year before, 1.5 million were opened.

But it still doesn’t top the heyday in 2009, when stock markets enjoyed rallies after the global financial crisis. That year, 3.9 million accounts were opened.

Market watchers attribute the boom this time to the public debut of companies including Samsung Biologics and Doosan Bobcat. To get into an initial public offering, an investor must have a brokerage account.

The demand for such accounts is expected to keep increasing this year since big players are lining up IPOs. The companies include Netmarble, ING Life Korea, Hotel Lotte and Celltrion Healthcare.

Another major drive is better-than-expected performance of the Kospi. The index hovered above 2,100 for a second straight trading day at the end of last month, largely thanks to improved investor sentiment from a rise in global crude prices and gains in other major stock markets in the United States and Germany.

The Kospi surpassed the 2,100 level for the first time in 19 months on Feb. 21 as investors anticipated strong 2016 performance reports from locally listed companies.

Backed by the uptick in the market, 86,532 new accounts were opened between January and Feb. 24.

Hanwha Investment & Securities expects the Kospi to continue its moderate upward trajectory. The forecasted range for this month is 2,050 to 2,160.

“Improved exports in February and stable economic recovery in emerging economies all contributed to boosting investor sentiment,” the company’s research division said in a monthly forecast report. “When the Kopsi continues to remain above the 2,100 level, the influx of investment will likely go toward securities funds.”