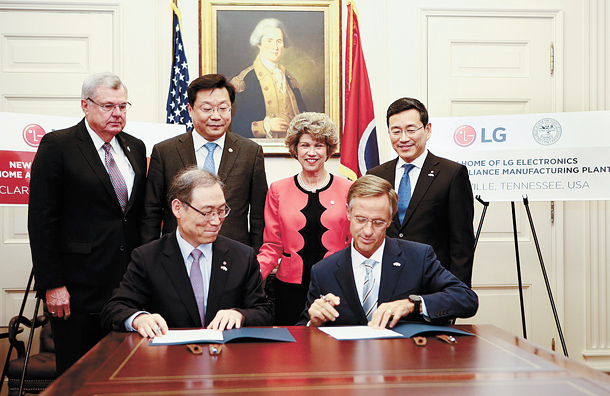 Dan Song, president of LG Electronics’ home appliances business, front left, and Gov. Bill Haslam, front right, sign a memorandum of understanding on Tuesday in Tennessee. LG agreed to build a washing machine factory in the state. In the back row from left are Curtis G. Johnson, a member of the Tennessee House of Representatives; Joo Hyung-hwan, Korean minister of trade, industry and energy; Kim McMillan, mayor of Clarksville; and William Cho, president and CEO of LG Electronics USA. [LG ELECTRONICS]

LG Electronics’ plans to build a washing machine factory in Tennessee are taking shape as it seeks to sustain growth in the key American market while avoiding punitive protectionist measures from Donald Trump’s administration.

The company signed a memorandum of understanding with the state government on Tuesday in Tennessee, with the goal of clinching a contract by June and beginning construction by the year’s end. LG will spend $250 million on the project.

The facility, to be built on a 300-acre plot of land in Clarksville, will begin making washing machines for sale in the United States by the first half of 2019 at the earliest, LG said. The plant will be able to produce at least a million units of both front- and top-loading machines a year. The site may later expand to production of other home appliances, the company said.

The memorandum of understanding came nearly two months after Jo Seong-jin, CEO and vice chairman of LG Electronics, told reporters that the company was considering placing a key manufacturing base in Tennessee. He then vowed to finalize the plan by the middle of the year.

Jo’s remarks were said to have been prompted by Trump’s threat to renegotiate the North American Free Trade Agreement with Canada and Mexico. Trump went as far as lashing out against Toyota’s plan to produce cars in Mexico and export them to the U.S. without paying border taxes.

But LG argues its decision is far from abrupt, noting that the company has been studying eight states in the past six years for a possible production facility in the United States.

“Tennessee is the clear choice for LG’s latest major investment in America, given the state’s excellent business climate, quality work force and central location for distribution to customers in the country,” Song said.

LG produces washing machines in Asia for export to the United States. Still, the new Tennessee plant does not mean production volume from these factories, including one in Changwon, South Gyeongsang, will decrease, given constant sales growth in the United States, a company spokesman said.

LG has maintained the top spot in the market for premium front-loading washing machines from 2007 to 2016, according to data from U.S. market research firm Stevenson Company.