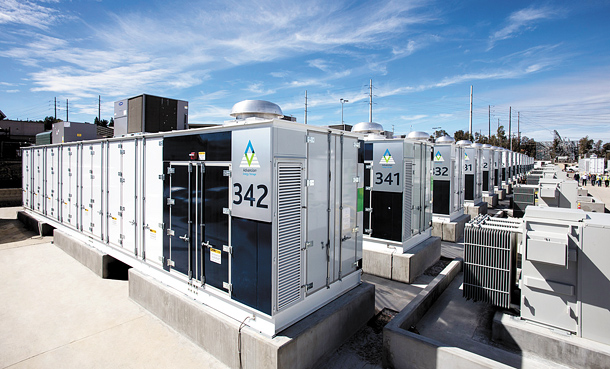 Samsung SDI, a manufacturer of batteries and components for solar energy and displays, provided batteries for an energy storage project in California in the largest supply deal to date in the ESS industry.

The company said on Tuesday that the 240 megawatt hour (MWh) lithium ion batteries comprising 700,000 cells will be used in a power supply chain project in California, a state rife with power shortage issues.

The storage system is a core part in the smart-grid business as it helps to maximize energy efficiency by storing surpluses and supplying it when extra power is needed.

SDI said the supply is enough to power 40,000 homes for four hours.

More than half of the delivered batteries or 150 MWh comprising 440,000 such cells have been deployed in an energy storage facility developed by AES Energy Storage, a U.S. power solutions company. The facility, SDI said, is the largest Li-ion battery-based ESS installation in the world.

Involvement in the large-scale energy project has helped Samsung SDI boost its presence in the U.S. The battery maker accounted for more than 40 percent of the U.S. electric power ESS market last year.

“In 2015, the USA ESS market was 167 MWh, while the 2016 market rose to 590 MWh, with the recent Samsung SDI related ESS projects volume representing almost half,” Samsung SDI said in a statement.

The company said that building the supply usually takes one year, but it could shorten the period through close cooperation with its partners.

The energy project is aimed at replacing the energy supply provided by natural gas plants by storing some of the renewable electricity generated during the day, and releasing that electricity onto the electric grid when demand picks up.

Seo Jung-hwan, head of SDI’s U.S. branch and John Zahurancik, president of AES Energy Storage, participated in a ceremony to celebrate the construction of the energy storage system facility in Escondido, California, on Feb. 24.

“A key element of successfully delivering the largest ESS project in the world has been having trusted relationships with our suppliers to ensure a steady supply of quality components for our Advancion platform,” said Zahurancik. “We’re pleased to have had Samsung SDI, a certified Advancion supplier for several years, provide batteries to power this record-breaking project.”