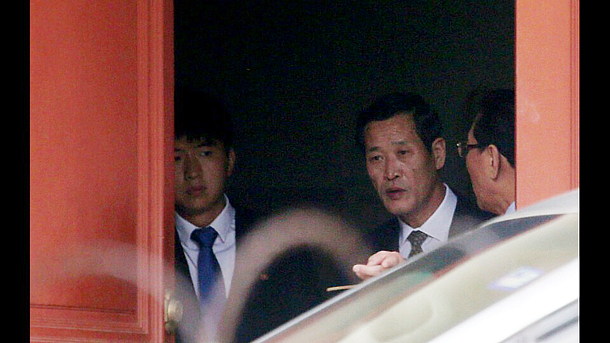 Ri Dong-il, center, a spokesman for North Korea’s Ministry of Foreign Affairs, who formerly served as deputy ambassador to the UN, is seen in the North Korean Embassy in Kuala Lumpur on Tuesday. [YONHAP]

Two women implicated in the killing of North Korean leader Kim Jong-un’s half brother were charged with murder in a Kuala Lumpur court Wednesday.

Vietnamese Doan Thi Huong, 29, and Indonesian Siti Aisyah, 25, could face the death penalty if convicted of assassinating Kim Jong-nam with a deadly nerve agent on Feb. 13 in the Kuala Lumpur International Airport.

They are two of the three suspects arrested so far by Malaysian police. Authorities said they needed more time to investigate Ri Jong-chol, 47, before deciding his fate.

Ri is one of eight North Koreans implicated in the killing; four were said to have returned to North Korea’s capital of Pyongyang in the days after the attack, while three are believed to be holed up in the North Korean Embassy in Kuala Lumpur. All are men. 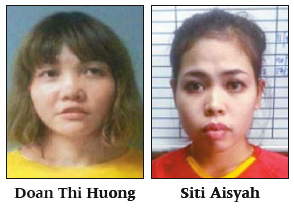 In the charge sheet, the female suspects were accused, together with the four men in Pyongyang, of murdering “Kim Chol” at the Malaysian airport, according to The Star, a news outlet in Malaysia.

Kim Chol is the alias Kim Jong-nam used in his travel document. Malaysian police confirmed that the passport he carried was ostensibly diplomatic but Kim Jong-nam had no known position in the North Korean government. Malaysian authorities have yet to confirm that the victim is the estranged brother of North Korea’s leader because no family member had come forward for a DNA test.

The charges come as Ri Dong-il, a spokesman for North Korea’s Ministry of Foreign Affairs, who formerly served as deputy ambassador to the UN, is in Malaysia to negotiate with Malaysian authorities to release Ri Jong-chol and claim Kim Jong-nam’s corpse.

Ri Dong-il told reporters outside the North Korean Embassy Tuesday hours after his arrival in the Malaysian capital that he would also work towards the “development of friendly relations” between Malaysia and North Korea. He did not say who he intended to meet.

The diplomat left the embassy at around 4:40 p.m. and returned a little over 90 minutes later, stone-faced, and didn’t respond to reporters’ questions. It appears he visited the Institute of Diplomacy and Foreign Relations, a think tank under Malaysia’s Foreign Affairs Ministry. It is unknown how the talks went.

Discussions between the two sides are expected to be tough because Malaysian police have adamantly refused to give up the body, saying Kim’s next-of-kin must claim it.

“We can entertain [North Korea’s] requests only when all investigation procedures that are being carried out now reach a conclusive ending,” he was quoted as saying.

Zahid said that any move to share evidence with foreign and international bodies will only be possible once all investigations and legal processes have been concluded, according to the paper.

That was backpedaling from a Tuesday statement by Khalid Abu Bakar, Malaysia’s inspector-general of police, that they were willing to share evidence of VX nerve agent, which killed Kim Jong-nam, if Malaysia’s Foreign Affairs Ministry gave the green light, according to The Star.

“While we are open to share our information,” said Zahid, “they also have to respect our legal system which requires all evidence to be kept until the court decides on the case,” according to the New Straits Times.