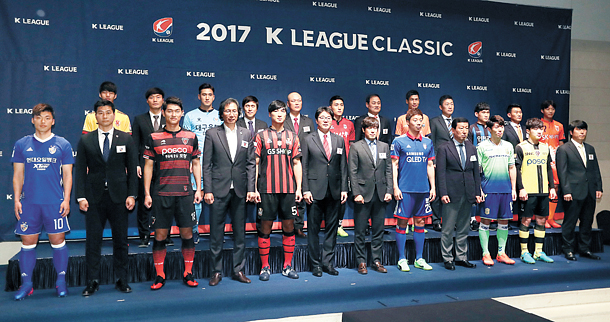 Players and managers from each team pose for a picture after the 2017 K-League Classic media day event on Feb. 23. [YONHAP]

The K-League Classic begins its new season tomorrow, with all 12 teams scheduled to play their first matches over the weekend.

Of the 12 clubs in the Classic, Jeonbuk Hyundai Motors was selected as the favorite to win the 2017 league title during the press conference on Feb. 23.

Jeonbuk won the K-League title in 2014 and 2015, although the trophy slipped out of their hands last season after it was slapped with a penalty due to its scout being involved in a bribery scandal.

They managed to make up for their loss by taking the trophy from the Asian Champions League (ACL) last year.

Lee Dong-gook, who holds the league record in scoring with 192 goals, will lead the team once more. The four time Classic league MVP is eight goals from scoring 200 goals, and looking at his recent performance, he may well exceed that number easily this time around.

Lee has been scoring double digit goals for eight straight years and in 2016, he was ranked seventh in the league by scoring 12 goals in 27 matches. He is also only four assists away from recording 70 assists.

Kim Shin-wook, a 1.96 meter (6 foot 5 inch) target man, is another key player for Jeonbuk. He’s had a rather disappointing season last year, only managing to score seven goals in 33 games due to an injury in the beginning of the season. 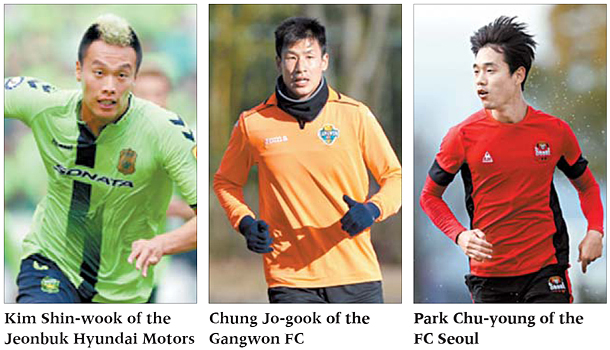 However, in 2015, Kim led the league in scoring with 18 goals in 33 games while he played for Ulsan Hyundai FC. As he enters his second year with Jeonbuk, Kim will be a key in manager Choi Kang-hee’s offensive tactics.

Jeonbuk’s morale has been somewhat down since it was disqualified from this year’s ACL due to a scandal involving its scout, but Jeonbuk hopes to recuperate and start their season strong with their eyes set on the domestic league title.

But their journey to the top will not be easy as defending champions FC Seoul will stand in their way throughout the season.

Despite Adriano’s absence, Dejan Damjanovic and Park Chu-young still stand strong for the team, as it strives to clinch a triple crown this year - taking titles from K-League Classic, the ACL and Korean FA Cup.

After donning the FC Seoul jersey again in 2015 after a stint overseas, Park was a player that the team could count on when in a pinch.

He even netted Seoul’s winning goal against Jeonbuk during their 2016 league title game. With the win, not only did he play a key role in winning the team’s league title, he also won his first K-League title since his professional debut in 2005.

After getting demoted to the Challenge in 2013, Gangwon FC returns to the Classic for the first time in three years. The team, led by Choi Yun-kyum, came a long way as they made their way up from the Challenge by taking down Seongnam FC during the playoff last year. Not only did Choi bring the team back up to the Classic, he was also selected as the K-League’s manager of the month in September 2016.

With the addition of Lee Keun-ho and Jung Jo-gook, Gangwon is prepared to compete against the league’s best.

Jung, a veteran striker at the age of 32, joined Gangwon after spending the second wind of his career with Gwangju FC last season. Jung was the leading scorer of the league, piling in 20 goals in 31 games, eventually earning himself the league MVP award.

Jung will be supported by Lee, a former national team striker known for his versatility on the field.