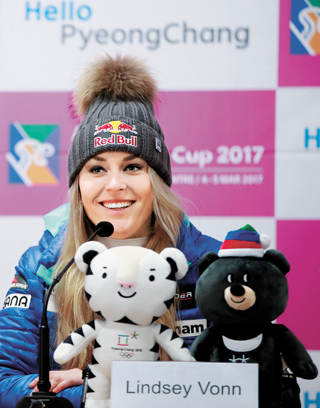 Lindsay Vonn speaks at a press conference at Jeongseon Alpine Center in Gangwon on Thursday. [YONHAP]

Former Olympic alpine skiing champion Lindsey Vonn said Thursday she is satisfied with the Olympic course in Jeongseon, Korea, after having her first training ahead of an International Ski Federation (FIS) competition.

Vonn, who won the gold medal in downhill at the 2010 Winter Olympics, landed in Korea on Tuesday to compete at the FIS Ski World Cup scheduled for Saturday and Sunday at Jeongseon Alpine Centre in Jeongseon, Gangwon Province, some 214 kilometers (112 miles) east of Seoul.

The FIS Ski World Cup in Jeongseon doubles as a test event for the PyeongChang Olympics.

It will feature the downhill and super giant slalom (super-G) alpine skiing speed events. Jeongseon is also a sub-host city for the 2018 PyeongChang Olympics.

“I really liked the course,” Vonn said at the Jeonseon Alpine Centre, where construction is in the final stretch in the surrounding area. “It wasn’t perfect, but it’s a beautiful track. I think when the snow gets harder, it will be pretty fast and extremely fun.”

Vonn is among the most decorated skiers in history. She has two world titles, four overall World Cup titles and 77 individual World Cup victories, the most among female skiers.

The 32-year-old American is also the first non-Korean athlete to be named an honorary ambassador for the 2018 Winter Games.

When asked about the Olympic mascots, Vonn, who previously had a relationship with golf star Tiger Woods, mentioned Soohorang, a white tiger, over Bandabi, an Asiatic black bear, as an “interesting mascot.”

“I really like them. I think they are really cute,” she said. “Especially (Soohorang) ... super cute.”

Before coming to Korea, Vonn crashed in a super-G race last week at the FIS Ski World Cup in Crans Montana, Switzerland, and later withdrew from a combined event. Vonn, however, said she feels better this week and is ready to race.

On Thursday’s downhill training, Vonn posted the best time among 52 skiers at 1 minute, 41.17 seconds, which was 0.17 second ahead of Ilka Stuhec of Slovenia, the 2017 World Championships winner in downhill.’

Vonn said she doesn’t feel “extra pressure” racing on the Olympic track at the World Cup in Jeongseon.

“My goal is just to try to get as much experience on the track as possible to get a good feeling on it,” she said. “Pressure will come next year but not so much in this year.”

Vonn, the four-time overall World Cup title winner, said she wants to build her confidence ahead of the Olympics. She is also looking to extend her World Cup wins record.

“I’m not sure how many World Cups I would have won before the Olympics but hopefully more than 77,” she said.

“It’s not necessarily important whether I win these test events or not. What matters is how confident I’m on the track.”

Vonn said the PyeongChang Games would likely be her last Olympics. She has so far competed in three Olympics - Salt Lake in 2002, Torino in 2006 and Vancouver in 2010.

“Most females retire before 33, so I’m pretty sure PyeongChang will be my last Olympics,” she said. “I was not able to race (at the 2014 Olympics) in Sochi because of a knee injury. So, I think my main focus before the PyeongChang Olympics is to stay healthy.”