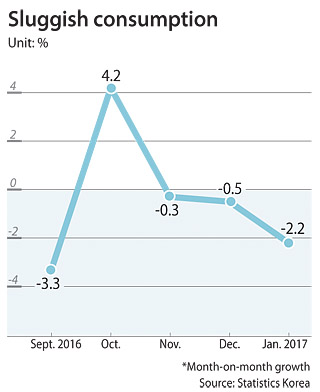 Domestic consumption fell for the third consecutive month as people bought fewer vehicles and cosmetics. It was the first three-month decline since the global financial meltdown of 2008.

According to Statistics Korea Thursday, domestic consumption dropped 2.2 percent in January compared to the previous month. It was the first time since December 2008 that the figure declined for three consecutive months.

Consumption in October rose 4.2 percent compared to the previous month. But it fell in November and has been falling since.

“Sales of durable goods dropped 4.5 percent as fewer people purchased vehicles,” said Joo Hwan-wook, a director at the Ministry of Strategy and Finance, “and non-durable goods fell 1.9 percent as sales of cosmetics dropped.

“It appears that consumer sentiment has weakened when compared to the past and rising uncertainties in the nation and abroad and a weak domestic market due to reasons such as a slow labor market might have further negative impact on the economy.”

The statistics agency added that it doesn’t have specific data on whether the so-called Kim Young-ran Act had a negative impact on domestic consumption ahead of the Lunar New Year holiday. The antigraft law limits the value of gifts one can give to public officials. It did say that department stores and discount chains offered cheaper gifts for the holiday compared to the past.

According to the Bank of Korea, the composite consumer sentiment index continued to fall after hitting 102 last October. It dropped to 93.3 in January. A reading above 100 points indicates the majority of survey participants maintain a positive outlook on the national economy, while a reading below 100 indicates a negative view.

“Industrial output has been improving as the country’s exports have recovered recently. Facilities investment continues to rise as well,” said Joo. “Mining and manufacturing production rose significantly as local companies manufactured more semiconductors and electronics products compared to the past.”

Exports rose for the fourth consecutive month from November to February, jumping 20.2 percent year on year last month, which was the biggest increase since November 2010, when they rose 28.7 percent.

The manufacturing capacity utilization rate rose 1.7 percentage points from the previous month to 74.3 percent. The figure has been rising since October last year after falling to as low as 70.9 percent.

Facilities investment, or investments on equipment and machinery, rose 2.6 percent in January from a month earlier and 11.4 percent compared to the previous year. Investment in transport equipment dropped.