Samgyeopsal it ain’t so: Pork belly prices keep on increasing

Samgyeopsal it ain’t so: Pork belly prices keep on increasing 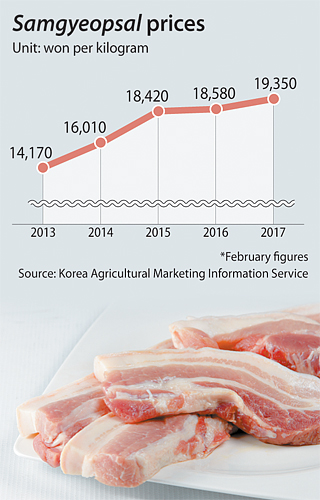 In Korea, March 3 is a particularly special day for fans of pork belly. In Korean, the juicy bacon-like meat is known as samgyeopsal, which literally translates to “three-layered meat,” hence the noticeable spike in meat consumption on the third of March.

But this year might be different. On Monday, the Korea Agricultural Marketing Information Service reported that the average consumer price of 1 kilogram (2.2 pounds) of domestic pork belly was 20,213 won ($17.67), nearly 23 percent higher than the average price of samgyeopsal in the past five years.

By Thursday, the price had settled at 16,822 won, but it’s still higher than the five-year average of 15,650 won. On top of that, some retailers could still be found selling a kilo of pork belly for more than 20,000 won.

A report from the Korea Rural Economic Institute attributed February’s price increase to a short supply of pork in January’s wholesale market, partly due to government limits on the movement of pigs and cows after cases of foot-and-mouth disease broke out that month. This limited the transfer of pigs to slaughterhouses.

The Lunar New Year holiday, which fell in January this year, also contributed to the short supply as slaughterhouses had fewer working days that month.

The institute’s forecast for March isn’t any better. It projects wholesale pork prices to range from 4,400 won to 4,700 won per kilo this month. February’s average price was 4,507 won.

Considering retail prices are generally three to four times more than the wholesale price, the jump will feel bigger on the consumer end with prices topping 20,000 won. Demand for pork belly typically jumps in March as the weather warms up and people go outdoors for barbecues.

Setting aside seasonal patterns, pork consumption has been on a consistent rise as Koreans’ eating habits have shifted from vegetables to meat in the past few years. Survey results released on Wednesday by the Rural Development Administration found that three out of 10 Koreans eat pork at least once a week. The most popular cut was undoubtedly the belly. Six out of 10 voted the fatty meat as their favorite.

The Korea Rural Economic Institute added in its March report that the increase in wholesale pork prices will likely continue through June, reaching 5,100 to 5,400 won per kilo.

“Pork supply generally slides in April and May because pigs slaughtered around this period are conceived in the summer, when sows are least likely to get pregnant due to the hot weather,” said Han Bong-hee, a researcher at institute.

Pork prices are expected to start falling in July and August to the 4,000 won level as supply improves.