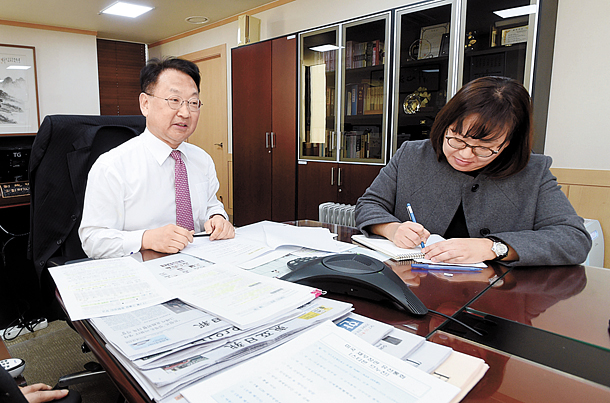 Korea’s finance minister and the U.S. Treasury secretary, in their first conversation since the Trump administration took office this year, agreed to strengthen economic cooperation between their countries.

A phone conversation between Korean Finance Minister Yoo Il-ho and Treasury Secretary Steven Mnuchin took place as concerns grow about a looming crisis that may begin with the U.S. labeling Korea as a currency manipulator and a hard-line trade policy by the U.S. government.

According to the Korean Ministry of Strategy and Finance, Yoo asked Mnuchin to help continue and strengthen the policy cooperation that the two countries have built over the years.

The ministry said Mnuchin responded positively to not only assist bilaterally but also regionally and globally.

The two top economists have agreed to further discuss their alliance this month at the G20 finance ministers and central bank governors’ summit in Baden-Baden, Germany.

Both Yoo and Munchin also shared concerns about the geopolitical uncertainties, especially created by the North with its recent missile tests.

The two agreed on implementing sanctions against North Korea that are tougher than the existing ones, including those applied by the UN Security Council as well as independent sanctions from Korea and the U.S.

The Korean Finance Ministry, however, did not mention whether the two had talked about possible actions by the U.S. against Korea on the trade deficit between the countries.

Last month, the Financial Times published an article that said the true currency manipulators were Taiwan and Korea, not China and Japan. The Korean Finance Ministry strongly rebuked the claims, adding that it only intervenes in the market when there’s an unusual trend in the foreign exchange market. In fact, the Korean won strengthened the most against the U.S. greenback compared to other foreign currencies.

The Korea Center for International Finance said Thursday, that as of Feb. 27 the value of the won has risen 6.1 percent compared to the end of last year to 1,133.7 won. This is sharper than Russia’s currency, which appreciated 5.1 percent and even Taiwan which saw a 5.1 percent increase. Japan’s rose 3.7 percent while China’s currency grew 1.1 percent. The euro and the Australian dollar depreciated during the same period.

On Thursday, the Korean won depreciated to 1,141.60 won on the news that the U.S. central bank will raise interest rates this month.

Mnuchin, who graduated from Yale, worked at Goldman Sachs for 17 years before creating and working for several hedge funds.