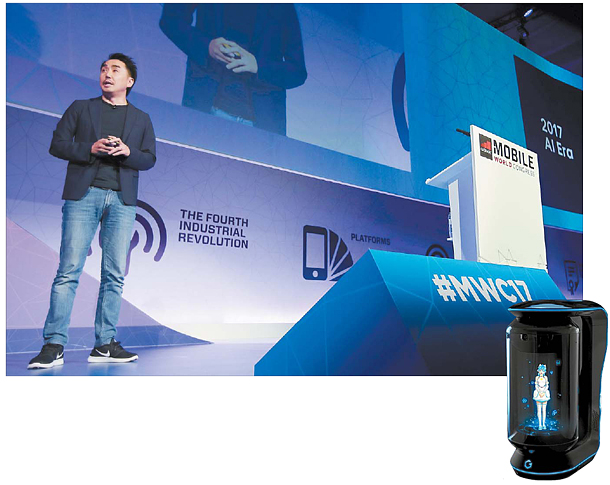 Clova, short for CLOud Virtual Assistant, is the outcome of the two companies’ so-called Project, which combines resources from Naver’s research and development arm, Naver Labs, and Line. Clova is an upgrade of Amica, a voice-controlled assistant that Naver showcased at a developers’ conference last October. The company vowed to come up with a substantial upgrade by the first half of 2017.

Takeshi Idezawa, Line’s CEO, called artificial intelligence one of the company’s most important research focuses and said it “represents a paradigm shift as dramatic as the rise of the smartphone a decade ago.”

“The Clova platform allows Line’s existing services to interconnect, moving users post-touch, post-display, and even post-Smart-Portal, into a new future,” Idezawa said during a keynote speech at the tech show in Barcelona on Wednesday. “We are aiming to make Clova Asia’s leading cloud AI platform.”

His remarks indicate Clova could try to compete against Google Assistant and become a strong Asian rival to the top search engine company and AI powerhouse. Clova, Idezawa said, aims to go beyond just being a voice assistant. The company hopes the tool will eventually be able to interact with all five human senses, from sight and touch to even taste and smell, which Idezawa described as the “next paradigm of AI.”

“Amazon Echo and Google Home are not yet compatible with Japanese and Korean languages, and Line is the messaging app that boasts the top share in the Asian region,” Idezawa told the audience.

Line is most popular in Japan, Indonesia, Thailand and Taiwan. Globally, the app has more than 217 million active users a month. Last July, the company listed $1.3 billion worth of shares on the Tokyo and New York markets.

Idezawa said Naver and Line plan to release a smart display called Face - so named because it actually looks like a robot - around winter, but he did not provide further details about what exactly the device will do. Both companies are also in talks with LG Electronics, Sony and Japanese toy maker Takara Tomy about a partnership to develop devices such as robots and toys that can be powered by the Clova AI assistant.

During the keynote speech, Idezawa announced that Line had acquired Vinclu, an Internet of Things start-up based in Tokyo. The companies will collaborate on a virtual home robot that can be embedded with the Clova platform. He did not disclose the terms of the deal.

Vinclu is known best for its hologram assistant called Gatebox, which allows users to “live” with a tiny holographic animated girl named Aizuma Hikari. The character lives in 20-inch transparent tube weighing 11 pounds that is activated with the press of a button.

The home device, equipped with a stereo speaker, camera and microphone, can wake up users, tell them the time, weather, humidity and schedule for the day, and send “I miss you” messages when away from home. The hologram assistant, which carries hefty price tag of 298,000 yen ($2,600), can also remotely control home devices such as televisions and lights. Vinclu began accepting preorders last December in Japan and the United States.