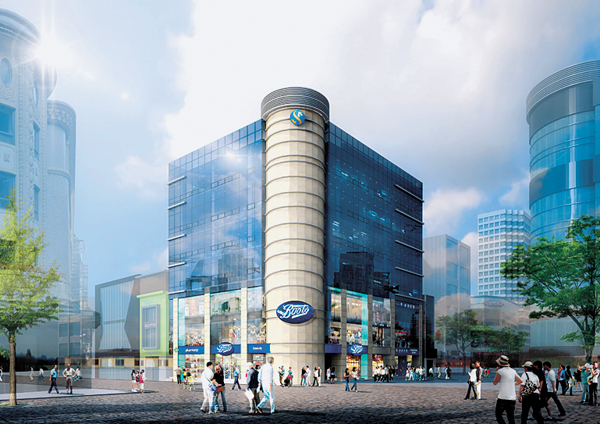 U.K.-based drugstore Boots will set foot in Korea this year in a partnership with E-Mart.

The Starfield branch will open in the year’s first half and the Myeong-dong branch, designated as Boots’ main location in Korea, is due to open in the third quarter.

The store in Myeong-dong, designated as the main branch, will measure 1,256 square meters (13,519 square feet) and the Starfield branch is 628 square meters.

E-Mart has been trying to attract the U.K’s leading pharmacy and beauty retailer to Korea for two years. In July, the company signed a partnership with Walgreens Boots Alliance and acquired sole operations rights for Boots franchises in Korea.

“The aim is to provide a wide array of products from beauty, health care to food and beverages; all areas deeply related to consumers’ lifestyle in general,” said E-Mart Vice President Jung Jun-ho and leader of the Boots team.

This is not E-Mart’s first attempt to tackle the market of domestic drugstores, known in Korea as health & beauty stores. In the last five years, this industry has been a battlefield for major retail groups including CJ’s Olive Young, GS’s Watsons and Lotte’s Lohbs.

To profit from the trend, E-Mart also launched in 2012 a drugstore brand of its own named Boons. Despite parent Shinsegae’s ties with the beauty industry, Boons’ performance was slow compared to its rivals in both sales and number of branches. In September, E-Mart also opened a beauty retail shop called Sugarcup inside Starfield Hanam.

Analysts say that Boots may be a crucial opportunity for E-Mart to make up for its slow growth and strengthen its competition.

E-Mart’s Boons and Sugarcup were both trial operations, established to better understand the market before launching a full-scale business in the health and beauty industry.

“The remaining Boons branches will be either closed down or transferred to Boots,” said an E-Mart spokesman.