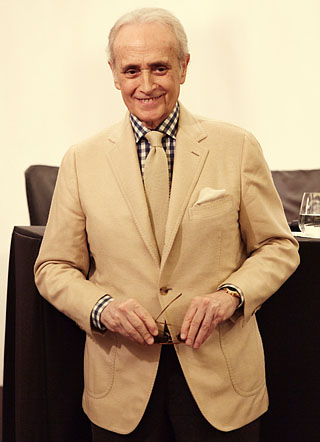 Spanish tenor Jose Carreras, who is currently on what is billed as his final world tour, has arrived in Seoul for his concert on Saturday at the Seoul Arts Center in southern Seoul.

Carreras, who last performed for a Korean audience three years ago, however, canceled one of his two concerts after catching a bad cold.

“Over the course of my career, I had to cancel only three or four concerts,” said Carreras during the press conference in central Seoul on Thursday. “It was a matter of luck and sadly it had happened then.”

Promising an “affectionate concert” on Saturday evening, Carreras said the Seoul concert will be full of songs that have influenced his musical career which dates back to 1970.

“The program for this concert has been drawn up thinking about the different times during my professional career,” he said. “Every piece that I sing in the program has somehow influenced me.”

Carreras will perform not only opera pieces but also musical numbers. The show will include Costa’s “Era de Maggio,” musical Man of La Mancha’s number “The Impossible Dream,” Derevitsky’s “Serenata sincera” among others. He’ll also sing a duet with Salome Jicia, a Georgian soprano.

“When I was a child, Carreras was like a God for me,” said Jicia. “We have already done three concerts together and I feel that he has this power to make a duet sound like a one-person singing. He has such a big heart and puts in all of his soul and emotions.”

According to Carreras, he’ll be singing songs in many languages including Italian, French, as well as Catalan - his mother language that the artist says is close to his heart and the best language to express his feelings in.

Although his current world tour is dubbed the “final world tour,” Carreras says he expects the tour to last at least for another two years.

“I try to go to all the places where I’ve had concerts during the past 47 years of my professional career, even to a town I visited 30 years ago,” said Carreras. “Sooner or later, I will retire, perhaps towards the end of this world tour. I already feel melancholic thinking about the day, but that’s law of life and the day must arrive. That is why I’m very pleased that I have the opportunity to sing for another couple of years… Although I retire professionally, I will sing from time to time and as well as for the benefit concerts for my leukemia foundation.”

Despite suffering from leukemia in 1987, Carreras survived the illness and came back to the stage less than two years later.

The Korean Symphony Orchestra will accompany Carreras, under the baton of David Gimenez, who is Carreras’ nephew.