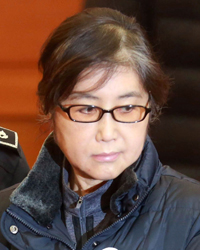 Choi Soon-sil, the controversial confidante of President Park Geun-hye, is reviewing a plan to send a petition to the United Nations Human Rights Council about the alleged inhumane treatments she received under the custody of the prosecution, her lawyer said Wednesday.

Lawyer Lee Kyung-jae said his client’s rights were violated during her four-month detention by prosecutors. Choi, the key figure in a scandal that led to the impeachment of President Park, was staying in Europe while suspicions in Korea grew.

She returned to Korea on Oct. 30, 2016, and was questioned by the prosecution the next day. Prosecutors placed her under emergency detention, saying she might flee or destroy evidence.

Since then, she has remained in custody. She was indicted in November on charges of extorting money from conglomerates in collusion with President Park, and her criminal trial is ongoing.

“The prosecution made four petitions to the court that Choi must be barred from meeting anyone other than her lawyer,” said Lee. “And the court accepted it every time. Unless the prosecution and the court protect the human rights of my client, we will make an appeal to the international community.”

On Feb. 21, 2017, the Seoul Central District Court accepted the prosecution’s fourth - and latest - request to bar Choi from meeting and communicating with anyone other than her lawyers.

The prosecutors made the request because she could try to destroy evidence or coordinate statements. The current ban will expire on March 21.

Under the ruling, Choi was barred from visitations other than from her lawyers. She was also prohibited from accessing outside books and documents. Clothes, medicine and other goods from outside are still allowed.

Following the ruling, Choi sent a petition to the court to stop the prosecution’s alleged infringement of her rights, claiming that investigators already obtained all the necessary evidence.

Choi also made an appeal in the courtroom, asking the judge to grant her access to outside contacts. “I am suffering depression, but I am blocked from receiving outside books,” Choi said. “It’s agony.”

In an exclusive interview with local media outlet The Fact, Lee also argued that he will take the case to the UN Human Rights Council if his appeal is struck down.

“My client is currently in solitary confinement,” he said. “Barring her access from books, a means of mental survival, is a grave human rights violation.”

The action is largely symbolic, because a decision by the UN Human Rights Council, even if it rules in favor of Choi and issues a recommendation to the Korean prosecution and court, is not binding.

The court, however, said the restriction is legitimate. “Taking into the gravity of the case and concerns of evidence destruction, temporarily restricting her interviews was inevitable,” a court official told the JoongAng Ilbo.