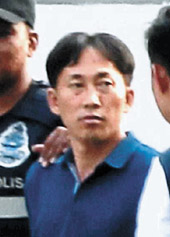 Malaysia ended visa-free entry for North Koreans traveling to the country on Thursday amid acute diplomatic strains between the countries following the assassination in Kuala Lumpur of Kim Jong-nam, the estranged half brother of the isolated regime’s leader.

He said in a press conference at the Malaysian Home Ministry that all North Koreans planning to travel to Malaysia “will have to apply for a visa.”

Malaysia is one of the rare countries North Koreans could enter without a visa. The visa waiver arrangement between the two countries was implemented in 2009.

After forging diplomatic ties in 1973, the two nations generally enjoyed good relations until recently. Malaysia opened an embassy in Pyongyang in 2003.

During the press conference, the deputy prime minister warned the North Korean government not to toy with Malaysia.

The Sun Daily quoted Zahid as saying it is “unfair” of North Korea “to accuse Malaysia, diplomatically or via communication, of conspiring with other organizations or nations.”

Pyongyang has accused the United States and South Korea of being behind the murder of Kim while North Korean Ambassador to Kuala Lumpur Kang Chol criticized Malaysia’s investigation of the brazen assassination.

Malaysia’s scrapping of the visa-free arrangement is expected to have an impact on North Korea’s ability to earn foreign currency in Southeast Asia. Around 1,000 North Koreans are estimated to be working in Malaysia.

The two countries relations have frayed since the shocking killing of Kim Jong-nam, oldest son of late North Korean leader Kim Jong-il, with a lethal nerve agent VX at the Kuala Lumpur International Airport on Feb. 13.

They have been trying to negotiate with Malaysian authorities to claim Kim Jong-nam’s corpse and the release of Ri Jong-chol, one of the suspects.

Malaysian authorities announced Thursday that Ri Jong-chol, the sole North Korean suspect currently in its custody, will be released Friday and deported.

They claimed there was insufficient evidence to charge the 47-year-old Ri with involvement in the murder of Kim.

Attorney General Tan Sri Mohamed Apandi Ali told the New Straits Times, “He will be released and will be deported as he does not have any valid documents.”

Ri was detained on Feb. 17 after investigators found that he had driven one of the four North Korean men also suspected of being involved in the killing.

Ri, a chemist and IT expert, was supposedly working for Tombo Enterprise, a small local herbal supplement firm, but didn’t actually work there.

Three suspects including Ri had been arrested so far by Malaysian police. The other two, Vietnamese Doan Thi Huong, 29, and Indonesian Siti Aisyah, 25, were charged with Kim Jong-nam’s murder Wednesday.

Ri is one of eight North Korean men implicated in the killing. Four were said to have returned to North Korea’s capital of Pyongyang in the days after the attack, while three are believed to be holed up in the North Korean Embassy in Kuala Lumpur.