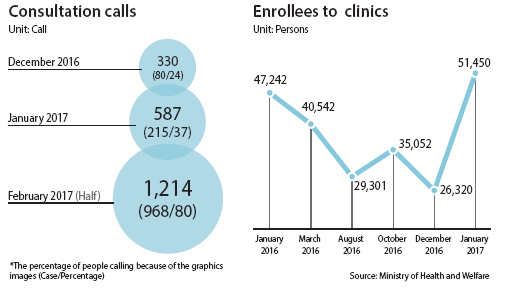 With an empty cigarette pack in his pocket, 24-year-old Choi Gi-hyeok entered a smoking-cessation center. “It was scary to keep on looking at lung cancer on cigarette packs,” he said. “If this is what happened, I swore to quit smoking and came here with my friends.” An unsightly scene of lung cancer surgery was printed on the pack he held. Smoking about 15 cigarettes a day at the time, Choi left the center carrying smoking-cessation aids such as nicotine patches after receiving a 30 minute consultation.

It has now been two months since the Ministry of Health and Welfare mandated printing graphic images of the harmful effects of smoking on cigarette packs. There are 10 pictures of adverse consequences such as lung cancer or laryngeal cancer now printed on the front and back of cigarette packages. The new packs are quickly replacing the pre-existing unadorned ones as they are sold by convenience stores and supermarkets.

In order to examine the situation, the JoongAng Ilbo visited 40 cigarette vendors at Gangnam Station, southern Seoul, and City Hall and Jongro District in central Seoul, to find that 60 to 70 percent of displayed cigarette packs were the type with graphic images. One Gangnam area convenience store worker, surnamed Kim, said, “Except the unpopular cigarette products, almost all had pictures printed.”

The majority of stores made no attempt to obscure the images. Of the 40 stores, only two deliberately put prices over the pictures. Furthermore, even when one sought to conceal them, it was ineffectual in eliciting sales. One convenience store owner at Jung District, central Seoul, said, “I hated looking at the pictures so I upended the cigarette packs and hid them, but the sale of cigarettes didn’t increase.”

On the other hand, instances of smoking-cessation consultations are on the rise due to this campaign. In just one hour on an afternoon weekday, five new people enrolled at the smoking cessation aid center in Seocho District, southern Seoul.

A forty-seven-year-old office worker, Ahn Byeong-gwon, said, “I’ve smoked for 20 years, but recently I felt uneasy as I coughed frequently. When I saw graphic warnings, I had nagging doubts at the back of my mind, ‘Should I continue smoking when it’s bad for my health?’ and I thought of stopping smoking completely.”

“There are many callers who ask themselves ‘Should I keep smoking even after looking at these pictures?,’” said Cho Yun-hui, a staff member at the Seocho District Health Center. Seocho is not alone in the surging interest in quitting.

Smoking-cessation clinics across the country have experienced a two-fold increase from 26,320 people last year to 51,450 as of this January.

The volume of calls at the smoking-cessation consultation line, 1544-9030, has increased, as well. Instances of consultations were 330 in December, 587 last January and 1,214 in just the first two weeks of February with an 80 percent increase of callers saying the images are the catalyst behind their call.

Overseeing the consultation lines, Lim Min-kyung, professor at the National Cancer Control Center in the National Cancer Center, said, “Normally in January, the number of smoking cessation consultations and clinic enrollments increases due to New Year’s resolutions, but it isn’t common for there to be an increase in February,” adding that, “Due to the graphical warnings, it appears the consultations will continue to increase.”

Specialists stress that if the government does not want to cut short this trend, additional policies are necessary. Already, a portion of smokers are avoiding the images by using a separate cigarette case or affixing stickers to packs.

“Looking at [implementations overseas], when time passes, the effectiveness [will drop off],” said Lee Sung-kyu, researcher at the National Evidence-based Healthcare Collaborating Agency, adding that, “To reduce the rate of smoking, we must look at which picture has the greatest effect, advertisements at retail stores must be banned and regulations on cigarette packaging must be actively pursued.”

“There are plans to legislate the banning of obscuring the graphic warnings in display stores by retail stores as soon as possible,” said Kwon Byeong-gi, a member of staff at the Division of Health Promotion at the Health Ministry, adding, “Considering those who experience revulsion from the graphic images, we will also intensify TV campaigns to raise awareness.”