Stewardship protocol has plenty of skeptics

Stewardship protocol has plenty of skeptics 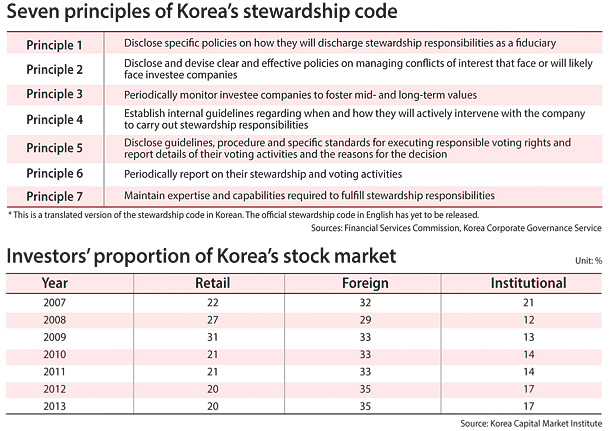 Many of Korea’s institutional investors opt not to take proactive stances on corporate governance of the companies they invest in, nor do they want to raise a red flag about questionable deals that might undermine the interests of shareholders.

Only 2.21 percent of the institutional investors of Kospi- and Kosdaq- listed companies voted against proposed agenda items in 2015 and the relatively active shareholders largely consist of multinational asset managers, according to Daishin Economic Research Institute.

The strong grip by the owners of family-run corporations or chaebol makes active shareholder engagement even more challenging as the owning families exert a great influence in a way that sometimes only bolsters the ownership of family members, not the interests of shareholders.

The financial authorities set out to fix the entrenched problem and recently pushed forward a less-known concept called stewardship code. 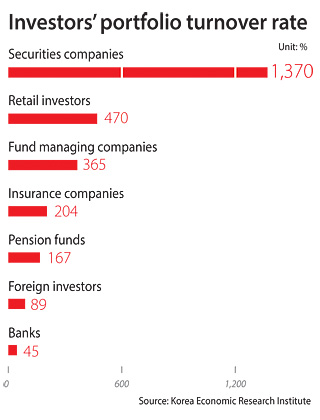 Despite the well-intended motivation, analysts in the legal and economic circle voiced skepticism that the measure introduced in December will barely deliver the proclaimed goals.

First adopted in the U.K. in 2010, the stewardship code, which is not legally binding, lists a set of guidelines aimed at encouraging institutional investors to execute their voting rights in a more responsible manner and engage in the creation of sustainable, long-term corporate value.

The Korean version of the stewardship code, consisting of seven principles, requires institutional investors to disclose how they will engage with and monitor the investee companies and the reasons for their voting activities.

Analysts cited lack of incentives to participate in and follow through on the rules as the weak points of the stewardship code.

“Carrying out stewardship not only requires the investors to be properly focused in terms of how you manage your portfolio but also requires a lot of time and resources,” said Simon Wong, a professor at Northwestern University School of Law.

“But not all asset managers are incentivized to take the time to find out the real issue and come up with good solutions,” said Wong.

Apparently acknowledging the factor, the Financial Services Commission said that it will consider some benefits for the signatories such as giving extra points when the participants sought to bid for entrusted business for state-run pension funds.

But even if such incentives managed to lure more participants, whether they will fully abide by the principles remains questionable. No penalties exist for not carrying out the guidelines.

“The regulator’s incentive might help attract asset managers at first, but what matters is pushing the companies to comply with the guideline,” said Hwang In-hwak, senior researcher at the Korea Economic Research Institute.

Hwang went on to note that if an asset manager is owned by a conglomerate, it becomes more difficult to serve independent monitoring role.

“There will be conflict of interests if a conglomerate-owned asset manager has to conduct stewardship responsibilities to its affiliates,” Hwang said, “The independence can also be compromised when it has business ties with investee companies.”

The core principle and objective of the stewardship code sought to have institutional investors pursuing a more long-term perspective when engaging in corporate governance.

But experts point out that the institutional investors have structural limitations to take on long term view.

“Generally speaking, the more intermediaries or agents you have in the investment chain the more ‘short-termist’ they have become,” said Wong.

“Due to worries about losing mandates from clients, institutional investors are incentivized to be ‘short-termist.’ Moreover, they typically manage a lot of money and own hundreds of companies, but in most companies they have hold less than 1 percent and may therefore not be strongly motivated to actively monitor and intervene.”

Securities companies have the highest rate of 1,370 percent, followed by retail investors. Pension funds registered 167 percent while foreign investors have an 89 percent turnover rate, according to Korea Economic Research Institute.

“The code is the list of sounding-good words devoid of any incentive or penalties,” Hwang said, “So, it is better to introduce policies such as tax benefits or additional dividends to long-term investors.”

The symbolic absence of the National Pension Service further threatens to undermine the code’s effectiveness.

“The participation of the National Pension Service weighs more than the sign up of dozens or even hundreds of asset managers,” said a source at Mirae Asset Global Investments.

“The pension fund acts as a standard among institutional investors and other investors tend to follow the moves of the National Pension Service.”

With 546 trillion won ($471.95 billion) in assets, Korea’s National Pension Service is the world’s third-largest pension fund. Still, the chance of the fund signing up for the code is slim in the near future since it is embroiled with the ongoing political scandal involving president Park Geun-hye and her confidante Choi Soon-sil.