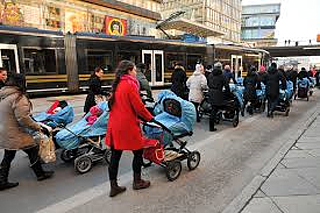 Last month, I visited Stockholm, Sweden to cover the Stockholm Furniture and Light Fair and other design events around the city. I attended over ten events in three days, meeting dozens of Swedish designers, architects and civil servants.

I used various means of public transportation, subway, bus and tram, to travel from my hotel to exhibition halls, galleries and architect offices. I also walked 20 to 30 minutes. Winter was severe in February in Stockholm, but I had a chance to observe Swedish lifestyle closely.

Some of the common themes that come up when explaining Sweden are its high fertility rate and family-friendly policies. Sweden’s fertility rate is 1.88, higher than the OECD average of 1.68 and far ahead of Korea’s 1.17, lowest among the OECD members. The secret to a high fertility rate that I found in Sweden was the seamlessly children-centered environment.

Scene 1: Kajsa was one of the guides in charge of reporters from nine countries — Brazil, Germany, Russia, Japan, France and more.

After 2 to 3 p.m., Kajsa was not to be seen, as she went to pick up her child. She starts her day early, so her husband would drop the child off at the daycare. And Kajsa is the one to pick up the child in the afternoon. The official schedule went on till evening, but no exception was made for her flexible hours. Her colleagues said, “When it comes to children, there is no exception.”

Scene 2: Kajsa could not report to work because her child was sick. All she had to do was to call and inform the office. Neither she nor her colleagues found it inconvenient. Everyone thinks that children could get sick, and it is a natural part of raising a child. In Sweden, parents can use up to 120 days of sick leave for children under 12. They don’t need to provide a doctor’s note, and annual vacation days are not affected (of course, some may take advantage of the system).

Scene 3: When a kneeling bus arrives, only strollers can get onboard using the back door. Riders with stroller’s get on the bus for free. It is to save the parents and caregivers the hassle of walking over to the front of the car to pay, leaving the child in the stroller. The system is considerate of the feelings of the parents and minimizes inconvenience of parenting. Buses were filled with strollers. It was trivial yet necessary service to keep parents connected with the world while raising children. I couldn’t help feeling sorry for the countless Korean women who raise children in isolated settings.

Last year, the number of newborn babies in Korea was a record low, and presidential hopefuls presenting campaign pledges addressing low fertility rate. They mostly talk about expanding national and public day care centers and extending maternity and childcare leaves. But rather than policies that require a huge budget, caring policies that enhance the quality of life for parents and children in realistic setting would bring more feasible changes, especially when the entire nation is willing to pay half of their income as tax as Swedes do.


*The author is a deputy lifestyle news editor of the JoongAng Ilbo.