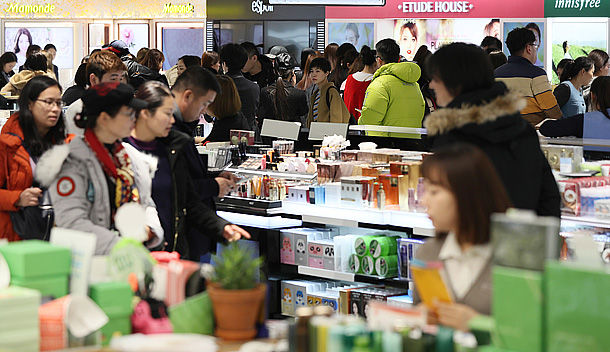 The cosmetics section at Lotte Duty Free’s Sogong branch in central Seoul is packed with shoppers on Thursday. Chinese tourists make up the largest pie of 70 percent in domestic duty-free sales. The Chinese government’s ban on tourism is expected to deal a severe blow to the Korean beauty industry. [YONHAP]

News that the Chinese government banned local agencies from sending tourists to Korea on Thursday is creating alarm among many industries that heavily depend on Chinese consumers.

Analysts say that this may be the first step of a major industrial retaliation from China against the Korean government’s decision to deploy the U.S. antimissile system known as Terminal High Altitude Area Defense (Thaad).

Statistics from the Korea Tourism Information last year showed that the average amount of Chinese tourists’ consumption in Korea was $2,319 in 2015. Assuming China’s measure will cut at least half the tourists in Korea to 4.03 million, this could consequently drop consumption by 9.3 trillion won ($8.04 billion) in total.

The blow is expected to be particularly heavy on duty-free operators, whose dependence on Chinese consumers is exceptionally high compared to other industries at 70 percent. Considering Korea’s duty-free industry raked in a record high of 12.3 trillion won last year, the contribution of Chinese tourists reaches near 8.6 trillion won. The measure also may push several city duty-free shops in the red, as operations doubled in the last two years as the Korean government issued more licenses.

Airlines also could be affected. Korean Air and Asiana Airlines, the nation’s only full-size carriers, said that Korea-China routes accounted for each 13 percent and 19 percent of their ticket sales.

“There are no significant changes yet in figures, but one concern is the order causing a negative effect for individual tourists as well,” said a Korean Air spokesman. Low-cost carriers, whose recent strategy has been expanding short-haul international flights, may be affected even more.

In the retail sector, analysts say cosmetic brands will be hurt most. Industry behemoth AmorePacific targeted the Chinese market earlier than other competitors. China takes up the biggest pie of sales in its global portfolio, although the company declined to reveal exact figures.

Meanwhile, three products of its subsidiary brand, Laneige, made Chinese authorities’ January list of prohibited imports due to product hazards. Although smaller companies have been on their radar, this is the first time the cosmetic giant was included on the list.

The domestic concern on China’s measure was demonstrated in Friday’s stock prices. Korean Air slumped 4.77 percent to 26,950 won compared to the previous day, while rival Asiana Airlines fell even steeper of 6.41 percent to 4,310 won. AmorePacific shed 12.67 percent to 251,500 won, its lowest closing price since January 2015. LG Household and Health Care lost 8.22 percent to end at 793,000 won.

“China’s restriction sheds light to how hard the government set its regulatory directions against Korea” said a report released Friday by Daishin Securities. “Uncertainty regarding companies that do business in Korea is expected to aggravate.”

Chinese tourists are a strong spending power. They accounted for as much as 60.1 percent of all credit- card purchases made by foreigners last year, according to a report released by Shinhan Card and the Korea Culture & Tourism Institute. The country topped the list with Japan ranking a distant second with 13.8 percent and the United States, third with a 9.4 percent share.