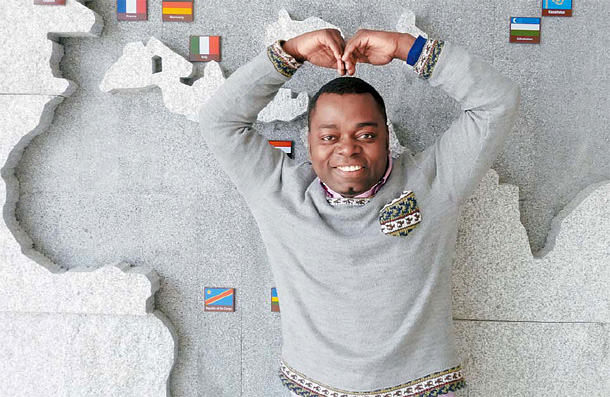 Byondi Franck Kimetya from the Democratic Republic of Congo recently became the first president of an African student alumni association here, itself a rarity in Korea.

He was elected in the alumni association meeting of Daegu University, held at the Daegu Grand Hotel on Feb. 22. Since 2010, the university has been working hard to invite more African students to study, more than Chinese or other international students from Asia.

Kimetya came to Daegu in 2010 with the help of a missionary organization. Back home, his father is a public official and his mother is a teacher. Kimetya learned Korean for a year before enrolling at Daegu University’s School of Computer and Communication Engineering.

“When I first came to Daegu University, there were not many African students,” he says. “Financial issues such as tuition and living costs were not the only problems for me. There were also the cultural differences, like food and etiquette. I used to eat this Korean pork-rib soup all the time, which tastes like Congolese pork soup.”

Kimetya received a scholarship at the university and worked in the college administration office to cover his tuition and living costs.

He graduated in 2015, then received his master’s degree the next year, and is now getting ready to pursue a doctorate degree.

After Kimetya’s success story got out, the number of African students at Daegu University rapidly increased. His story persuaded some of his friends to choose to study in Korea instead of France, a popular choice among students from the Democratic Republic of Congo. Since 2011, 10 African students graduated from Daegu University, and 41 are currently enrolled.

Having lived in the area for seven years, Kimetya now speaks Korean with a Daegu accent.

“Mae mudda aiga,” he says to express that he ate too much, using the local dialect of Daegu.

He also won third-place at a Korean speaking contest among foreigners on Dokdo in 2014 and 2015. He is also fluent in French and English.

Kimetya is very interested in issues concerning Dokdo. After he visited Ulleungdo and Dokdo islets, he started working as a member of Dokdo Supporters, an organization supporting Korea’s claim over Dokdo.

Kimetya is also the leader of a performance group, Kafrica, which stands for “Korea loves Africa.” Kafrica consist of African students who perform traditional African music and dance.

“We are mixing some K-pop and trot music in our performances for Korean audiences who are unfamiliar with African music,” Kimetya said.

When he is not involved in these activities, Kimetya also volunteers teaching English and French for free to high school and middle school students. He also helps out at a senior center in North Gyeongsang and at a center for the disabled in Daegu.

“I want to be a mediator between young Africans and Korean universities and companies,” he said.