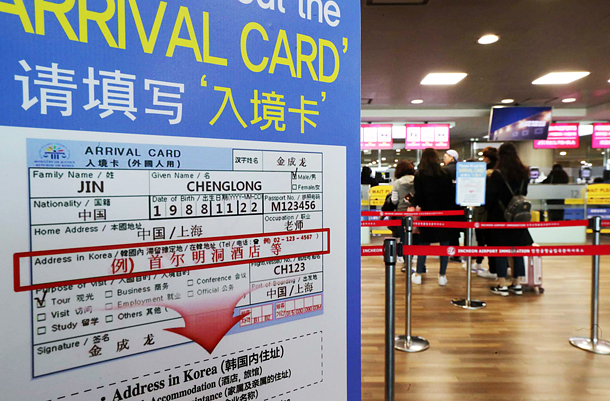 A notice instructing Chinese tourists how to fill in disembarkation cards is posted Friday in the arrival hall of Incheon International Airport. China’s government ordered travel agencies to stop selling packaged tours to Korea starting March 15 as retaliation for the deployment of a U.S. anti-missile system in Korea. [YONHAP]

China’s government ordered travel agencies to stop selling tour packages to Korea starting March 15 in the latest retaliation against the deployment of a U.S.-operated anti-missile system in Korea.

Under the ban, all travel agencies in China will be barred from selling travel packages to Korea, both group and individual, from March 15, a move certain to harm the local tourism industry.

It was reported that the China National Tourist Office summoned executives of travel agencies Thursday to a meeting at which the government instructed them to halt all tour packages to Korea to rebuff Seoul’s decision last July to deploy the Terminal High Altitude Area Defense (Thaad) anti-missile system.

One travel agency employee was quoted by the JoongAng Ilbo Friday saying the authorities issued a “strict guideline” to the agencies.

Chinese can still travel to Korea by booking tickets directly and traveling on their own without the help of agencies.

Last October, Beijing ordered local agencies to reduce the number of group tours to Korea by 20 percent over the next six months.

Of 17.2 million foreigners who traveled to Korea last year, nearly half, or 8.04 million, were from China, according to government data.
They are an important source of revenue for hotels, restaurants, entertainment and the duty-free industry.

Despite October’s crackdown, the number of Chinese tourists in Korea in January and February actually increased by about 10 percent compared to the same period last year. Many Chinese bought individual tour packages from travel agencies instead of group tours to circumvent the restriction.

It remains to be seen whether Chinese tourists interested in visiting Korea will buy tickets directly to get around the ban. A drop in the number of travelers from China appears inevitable until Beijing lifts the measure.

Beijing has been ratcheting up pressure on the South Korean government to drop its plan for the Thaad system, which both Seoul and Washington say is needed to defend against nuclear and missile threats from the Kim Jong-un regime in Pyongyang. China believes the anti-missile system, to be located in Seongju County, North Gyeongsang, is intended by Washington to monitor its airspace using its powerful X-Band radar system, a suspicion refuted by the U.S.

Beijing’s latest pushback came after reports surfaced that the Defense Ministry in Seoul is pushing to compete the Thaad deployment by July instead of by the end of this year, as previously anticipated. The Foreign Affairs Ministry in Seoul also announced Thursday that it kicked off negotiations with Washington to conclude terms of the Thaad deployment, which will deal with the provision of land in Seongju for the missile battery, among other issues.

Responding to the travel ban, acting president Hwang Kyo-ahn made clear Friday that Seoul’s decision to accept the Thaad system remained firm despite pressure from Beijing.

“The deployment of the Thaad system is what we must have in order to protect the lives of the people and national security against North Korea’s nuclear and missile threats. I once again assure you that it is not aiming to target a third country,” said Hwang in reference to China during a meeting with leaders of the governing Liberty Korea Party (LKP).

“China’s retaliation against Thaad is childish and arrogant as well as an abuse of power,” snapped Chairman Chung Woo-taik of the LKP. Chung pointed out that Beijing opposes the Thaad system but doesn’t curb Pyongyang’s nuclear and missile programs.

The opposition Democratic Party Chairwoman Choo Mi-ae also expressed concerns over the ban, saying it was “going over the line.”

“There have been DDoS (denial of service) attacks, boycott campaigns and export bans against South Korean companies doing business in China. Some Chinese media even bring up the possibility of attacking South Korean territory (where Thaad will be set up),” said Choo.

While acting President Hwang reaffirmed the government position that the Thaad installment would proceed as planned, the fate of the defense system could be up in the air if presidential frontrunner Moon Jae-in wins the next election, which could be held as early as May pending the Constitutional Court’s ruling on an impeachment motion against President Park Geun-hye.

Moon, who enjoys a mid-30 percent range approval rating and is leading South Chungcheong Governor An Hee-jung by almost 20 percent, has said that the Thaad issue should be dealt by the incoming administration. He has not specified whether he endorses or disapproves of the deployment.

Governor An maintains that the deployment decision should not be changed because it involves a bilateral agreement with Washington.

One government official told the JoongAng Ilbo that political uncertainty over the fate of the president must end before the government can respond effectively to China’s protest.

“We need to settle down our uncertainty in order to respond effectively,” said the official, speaking on the condition of anonymity.

He added that having a more stable political situation here would also help China decide what approach to take next in regard to Thaad instead of simply hitting the South with retaliations.

Since the signing of the Thaad agreement in July, China has rolled out a series of retaliatory moves against Korea, including banning of concerts or appearances by Korean celebrities on television shows and tightening of its visa regulations for South Koreans.

Recent retaliations targeted Lotte Group, Korea’s fifth-largest conglomerate, after it signed a contract this week to transfer a golf course in Seongju County to the Korean government, which will be the site for Thaad.

Chinese customs agents recently blocked a shipment of Lotte candy from entering the country. About 300 boxes, totaling 600 kilograms (1,300 pounds) of Lotte Confectionery’s yogurt-flavored candy were confiscated by Chinese quarantine officials in the northeastern city of Qingdao, industry sources said Thursday. Also on Thursday, Lotte Duty Free’s site was down for about three hours starting at noon after a denial of service, or DDoS, attack that was traced to an IP address in China.

While China accelerates pressure on the South, signs of rapport between China and North Korea were seen Wednesday in a Beijing meeting between Chinese Foreign Minister Wang Yi and North’s Vice Foreign Minister Ri Kil-song. The top Chinese diplomat reportedly said it was China’s position that the two Communist allies should nurture bilateral ties.