Korea takes on Israel in first round of WBC

Korea takes on Israel in first round of WBC

The Korean baseball team, ranked third in the world, will take on No. 41 Israel in the first round of the World Baseball Classic today.

Chang Won-jun will be Team Korea’s starting pitcher, while Jason Marquis will take the mound first for Israel. Both are experienced pitchers, with Chang producing 112 wins in the Korea Baseball Organization and Marquis recording 124 wins in Major League Baseball

“Jason is a longtime professional,” said Jerry Weinstein, manager of the Israeli baseball team, during a press conference at the Gocheok Sky Dome in western Seoul on Wednesday. “He’s been on big stages. He’s not going to buckle, and the situation is not going to control him. We feel good about having him on the mound.”

Out of all the players on the Israeli team, Marquis has the most experience. He made his MLB debut with the Atlanta Braves in 2000 and became a starting pitcher the following season. In 2004, he joined the St. Louis Cardinals, beginning a nine-year stint in which he played for nine different teams in the MLB.

Throughout his 15-year professional career, Marquis has recorded 124 wins and 118 losses with a 4.61 earned run average. He’s made $53 million throughout his time in the MLB.

The right-handed pitcher relies mostly on sinkers, a type of fastball pitch that causes batters to hit ground balls. During a qualifying round for the World Baseball Classic in September 2016, Marquis led the Israeli team in a win against England 9-1, producing five strikeouts in four innings.

But even so, the 38-year-old pitcher is slowing down. At the prime of his career in the MLB, Marquis was able to pitch an average speed of 150 kilometers per hour (90 miles per hour). But last year during the qualifying games, his fastballs were averaging 140 kilometers per hour. 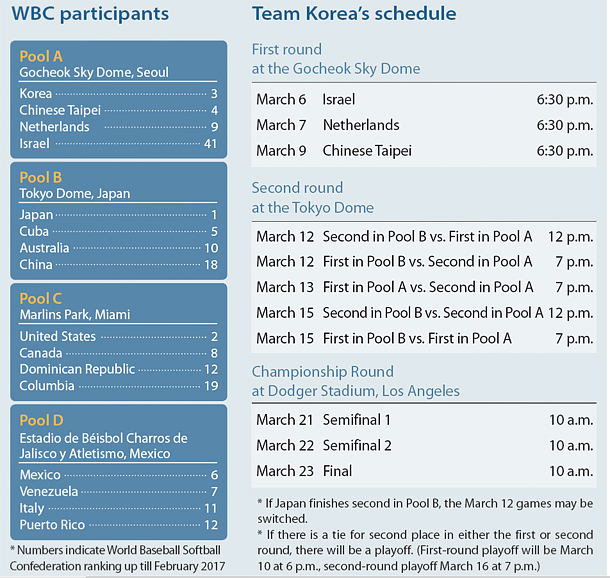 Marquis has been a free agent since leaving the Cincinnati Reds in 2015. He’s banking on a stellar performance in the World Baseball Classic to drive a comeback in the MLB.

Like many members of the Israeli team, Marquis is Jewish but was born in the United States. The team traveled to Israel together for the first time after the country earned a spot in the World Baseball Classic.

“Although Marquis is the starting pitcher, it may change any time,” said Kim Si-jin, former manager of the Korea Baseball Organization.

Team Israel has brought on 16 pitchers, and there’s a high possibility that it will utilize its large pool.

To compete against Marquis, Korea has also chosen its best pitcher, Chang Won-jun, as a starter.

The left-handed pitcher throws fastballs at an average speed range in the mid-140 kilometers and has the ability to throw sliders, curve balls and changeups.

“Batters have difficulty with timing when they face Chang,” said Kim In-sik, manager of the Korean baseball team.

The team faces Israel today at 6:30 p.m. in the Gocheok Sky Dome. The game will be broadcast live on JTBC and JTBC3 Fox Sports, both affiliates of the Korea JoongAng Daily.