Park In-bee gets her swing back

Park In-bee gets her swing back 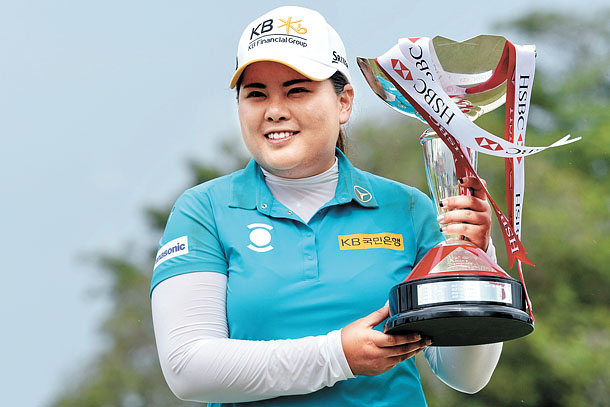 Park In-bee won the 2017 HSBC Women’s Champions in Singapore on Sunday and set a course record with a final-round score of 64. [AFP PHOTO/YONHAP]

It only took Park In-bee two tournaments to get back on her feet.

The former No. 1 golfer captured her 18th LPGA Tour victory at the HSBC Women’s Champions in Singapore on Sunday. With the win, she moves up on the Race to the CME Globe ranking from 120th to fifth.

Park started the day three shots behind the leader, Michelle Wie, and started to move up on the leaderboard as she made seven birdies in eight holes, from five to 12. Although she finished her round with a bogey, it did not prevent her from maintaining a lead against Jutanugarn, who shot 66 in the final round and finished the event at 18 under par, 270.

“Everything I looked at dropped in today,” Park said during an interview with the LPGA after the tournament. “I had very consistent ball-striking all week, and obviously there were a lot of birdie opportunities out there, and I was able to convert many of them today.”

Wie, the leader after the third round, got off to a strong start on the final day as she made back-to-back birdies on holes three and four, but a double-bogey by four putting on the fifth hole took away her chance at winning her fifth LPGA Tour event since 2014. Wie shot an even par on the final day and finished tied for fourth.

This was Park’s second tournament of the season and second event in eight months since the 2016 Rio Olympics. The top golfer was absent from the tour due to a thumb injury and was unable to swing a club for four months after the Olympics.

Aside from winning a gold medal at the Summer Games, Park’s best finish on the LPGA Tour in the 2016 season was a second-place finish at the Kia Classic. Sunday’s win at the HSBC Women’s Champions was Park’s first LPGA victory in 16 months after the 2015 Lorena Ochoa Invitational.

Although Park was absent from the tour in most of the 2016 season, she still managed to capture a career Grand Slam and qualified for the LPGA Tour Hall of Fame at age 27, making her the youngest entrant.

Jang Ha-na, the defending champion, shot 69, three under par, to finish tied for fourth. Park Sung-hyun, a super-rookie on the LPGA Tour, proved her potential, finishing third in the event.

With Park’s win, Korean golfers have now won three of the four LPGA Tour events so far this season. The players will have a week off and return to the green on March 16 to compete at the Bank of Hope Founders Cup in Phoenix, Arizona.