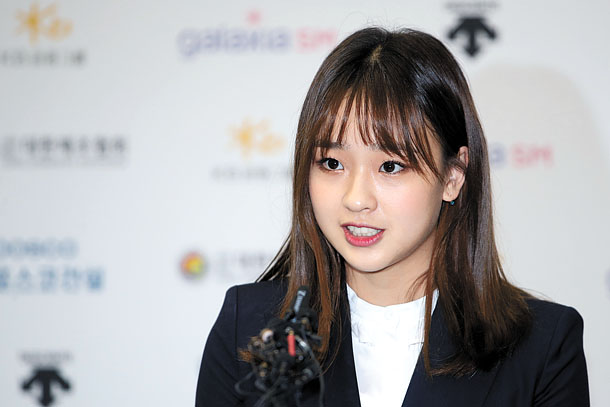 Rhythmic gymnast Son Yeon-jae on Saturday officially bid farewell to her 17-year career in the sport.

Son called time on her performing days following her decision last month to not enter the Korean team selection trials. The 22-year-old said she now wants to live an ordinary life.

“Rhythmic gymnastics has been almost everything in my life,” Son said at a press conference at the Taeneung National Training Center in Seoul. “I left school for about a year for the Olympics, but now I want to go back to school and continue my work as a student, not as an athlete.”

Son had been mulling over retirement after the 2016 Rio de Janeiro Summer Olympics, where she ranked fourth in the individual all-around, tied for the best Olympic performance by an Asian gymnast. 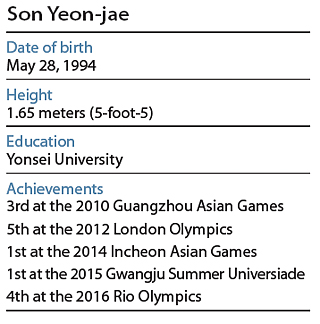 “After I decided to retire after the Rio Olympics, two things that I feared were regret and feeling sorry for myself,” she said. “I just looked forward to wrapping up my final season on a good note.”

Son has been one of the country’s most visible athletes since making her senior debut in 2010. She won the individual all-around bronze at the Guangzhou Asian Games that year. The gymnast said her 2010 performance was the happiest moment in her career.

“The Guangzhou Asian Games were the biggest event after I made my senior debut,” she said. “As soon as I won the bronze medal, I thought ‘my senior career has just begun.’”

After taking fifth at the 2012 London Olympics, Son added a gold at the 2014 Asian Games in Incheon. Leading up to the Rio Games, she broke her personal best score in all-around multiple times but fell shy of what would have been Korea’s first Olympic medal in rhythmic gymnastics.

“I originally thought about retiring after the Incheon Asian Games, but then I decided to give everything in my second Olympics,” she said. “I really worked hard to put forth my best efforts so that I wouldn’t have any regrets.”

After the Olympics, Son was named one of the country’s top athletes of 2016 in a national survey by Gallup Korea. Since the annual survey was first conducted in 2005, Son topped the list three times, having also done so in 2012 and 2014.

Son said she is a happy woman after receiving so much support from her fans. The gymnast said she would also like to thank the people who have constantly criticized her online for making her stronger.

“Whenever I saw negative comments online, I just thought I need to work harder and show better results,” she said. “They just made me work harder.”

Son said she also feels thankful for the sport itself. “I’ve learned many things and grown up through rhythmic gymnastics,” she said. “I’ve learned that when you can overcome tough and tedious work and do your best, results will follow in any kind of way.”

Son said she now wants to focus on her studies at Yonsei University in Seoul.