Xi does a Trump

Xi does a Trump 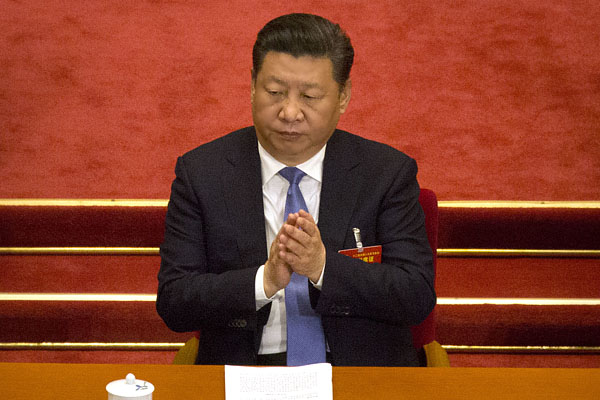 Is China trying to return to the age of empires? Is it so engrossed with its newfound power to have completely lost a sense of the current age? Without a doubt, North Korea is the reason to bring the American Terminal High Altitude Area Defense (Thaad) system to South Korea.

It was Washington that arm-twisted Seoul to accept the Thaad battery in order to shield its forces in South Korea from possible North Korean missile attack.

If Beijing really does not want Thaad in this region, it should make Pyongyang stop its missile and nuclear developments by cutting its oil supplies to North Korea instead of playing bully with South Koreans and their enterprises. China supplies more than 500,000 tons of oil to the North annually. Pyongyang would kneel if Beijing shuts down the pipeline from the Chinese border city of Dandong to North Korea for a mere month. Without oil supplies from China, North Korea would come to standstill. If it cannot do that to its “blood ally,” then it should stop picking on South Korea.

If it has complaints, Beijing should directly address Washington about the Thaad issue. As Seoul and the areas around the capital are beyond the Thaad shield, its efficacy as a deterrence against real attack is actually questionable. Yet Seoul accepted Washington’s demand for the deployment because of its broad security reliance on the U.S. military.

Sino-U.S. ties have tensed up since the launch of the hardline Donald Trump administration in America. After labeling Beijing a currency manipulator, the Trump administration is poised to start a currency war with China. Trump also wants to restore the U.S.’s upper hand in the region over territorial dispute in the South China Sea, a drastic shift from his predecessor’s defensive posture. Trump could ask for greater defense cost-sharing from Asian allies to ensure that peacekeeping carries a dear price.

The Global Times, a tabloid publication of China’s state mouthpiece the People’s Daily, said in an editorial, “We don’t have to make the country bleed, but we’d better make it hurt.” Such arrogant, nearsighted, Sino-centric rhetoric is totally unacceptable from a legitimate public media outlet.

Speaking in front of world leaders at the World Economic Forum in Davos in January, Chinese President Xi Jinping indirectly condemned the protectionist policy of Trump and championed free trade and globalism. We can only assume Xi to be hypocritical if he condones or encourages a series of retaliatory actions on Korean services and products ranging from a boycott of Korean products — particularly of the Lotte Group, which swapped some of its land, which will be used as the home of the Thaad battery — to the banning of group tours to South Korea and turning away Korean entertainers and performers.

How is Xi any different from Trump, who has been blaming immigrants for unemployment and crimes in the U.S. and pushing to build a wall on the border with Mexico? It is a disgrace that China resorts to economic muscle-flexing to show its prowess and tame its neighbor.

Korea faces a leadership vacuum. A summit to iron out the differences is impossible. It constitutes an act of cowardice to bombard a country in distress with economic sanctions. The foreign ministry merely says it will respond with “principles and confidence.” But we can hardly expect a reaction of principles and confidence from bureaucrats ducking decisions while their boss awaits an impeachment trial verdict.

Given the framework of Korea-U.S. relations, the Thaad deployment has become irreversible. Nevertheless, Seoul must not rush with the installation as Washington hopes and instead must work to persuade Beijing to see reason. Seoul can use two cards at this moment: it must press Beijing hard for stricter actions on Pyongyang such as cuts in its fuel supplies and at the same time assure Beijing that the Thaad would not lead to South Korea’s joining of the missile defense system of America and Japan. The two cards can offer a rationale for Washington to pitch in support of Seoul.

China’s crackdown on Lotte could extend to other South Korean corporations like Samsung, Hyundai and LG. The government must do all it can to minimize the damages inflicted on Korea Inc. from its security decision until the next administration steps in.

We must address the Chinese conundrum. If we cannot do that, we won’t be able to voice our position in Washington’s new policy toward North Korea. In particular, we must ensure that Washington does not put the option of a preemptive strike against the North into action without our full consent.