A diet craze has swept the nation with its promises for weight loss using rather unconventional means. The so-called low-carb high-fat (LCHF) diet, similar to the Atkins diet or the recently popular ketogenic diet, was introduced to Korea through a three-part television documentary special aired late last year by author and documentarian Hong Ju-yeong.

Her documentary series became a hot topic of discussion, especially as the participants of its study claimed to have recorded a drastic weight loss while eating as much butter and pork as possible, which seemed almost too good to be true for most dieters. The fantastic claim and biggest appeal of LCHF was written in bold on the cover of Hong’s book released last month - “Forget about calories, the only thing to remember is low carbohydrates and high fat!”

The basic instructions of the LCHF diet according to her documentary were as follows: by keeping carbohydrate consumption such as bread, rice, and fruit to only 5 to 10 percent, protein at 20 to 25 percent, while consuming fats at up to 70 to 75 percent, weight loss was possible due a supposed change in body composition.

“The key is to keep carbohydrate consumption low,” said Hong, who advocated that most carbs consumed today were too processed and high in sugar content. “I can’t even get used to the smell of carbs anymore; my body has gotten too sensitive to the contained sugars.” 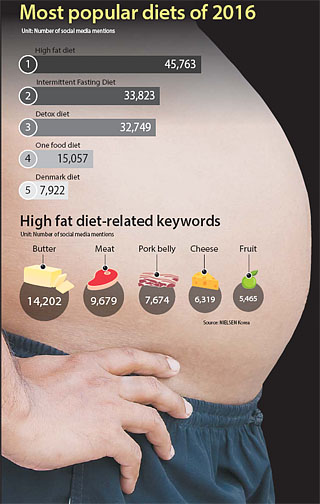 The documentary stated that keeping carbohydrates low means that the body must rely on other sources of energy in a process called ketosis, where the body must now rely on fat for energy. This phenomenon was explained to be possible due to the effect that carbohydrates have on insulin, which is often dubbed as the “fat-storing hormone.” High carbohydrate consumption means higher insulin levels and often goes hand-in-hand with another hormone called leptin, which determines how hungry a person feels at all times.

“Carbs are the foremost source of energy that the body utilizes,” Hong explained. “However, following the guidelines of this diet makes it so the body has to rely on fats as its main source of energy instead. I, too, used to count calories during my diet, but not anymore.”

The documentary special clearly had a strong impact on the Korean audience, leading to a dramatic increase in sales for butter, pork, and cheese. It became a common sight in the latter of half of 2016 to see many grocery stores actually run out of these items as the popularity of the diet increased.

Later, the actual results from people who allegedly followed the diet were already starting to flock in just two months after the airing of the first installment of the documentary. Lee Min-ji, a university student reporter for Campus Job n Joy said she lost 2.5 kg (5.5 pounds) after just one week of following the diet, documenting a detailed report of her diet routine in an article published on Nov. 8. The results, however, were short lived as she said she regained all of her lost weight in a short time.

Similarly, the results of other dieters such as celebrities and bloggers were surprisingly identical in that the initial loss of weight was gained back a short time after.

“This is a diet that requires more studying compared to others,” said Hong, who explained that LCHF wasn’t as simple. “Korea is still too unfamiliar with the diet, and there are many who think the diet is as easy as eating a lot of pork belly.”

The documentary revealed that five out of seven of the most sold butter brands last year contained processed ingredients like trans-fats, which according to Hong, was never advocated and were even harmful to dieting efforts.

But paying closer attention to nutritional details aren’t the only things dieters must worry about.

Fitness guru and bodybuilder Arnold Hong posted a video series on YouTube documenting his journey with the new diet lifestyle. However, his experiment with LCHF was soon cut short after discovering side-effects on his body.

“It has been 19 weeks since I started the LCHF diet, and my body is finally seeing negative effects,” said the bodybuilder in his final video update on Dec. 19. “A large amount of acne has been appearing on my body, and my dermatologist said my new diet could be the reason.”

The bodybuilder proceeded to reveal the red acne on his chest and explained that his back and shoulders were experiencing the same change, adding that he has never encountered such a severe case of acne in his life.

What he unveiled was similar to the rare skin condition known as Prurigo pigmentosa, also known as the keto rash. The condition was addressed in the documentary as being caused by a sudden dip in carbohydrate levels being the culprit.

“I never experienced it myself as my decrease in carbs was more gradual,” she said. “There hasn’t been a case [that I’ve seen] where the symptoms last for more than a month.”

However, accounts with the dreaded side-effect on online forums such as Reddit were more complicated, some having to go through a lengthy process of food elimination in their diet. Additionally, Korean and international nutritional experts similarly remained divided on their stance regarding the diet.

In a recent study published in The American Journal of Clinical Nutrition on Nov. 30, researchers concluded after a 40 week randomized controlled trial of 46 men that over the course of 12 weeks, a low-carb diet had no significant difference in weight loss compared to the group consuming a high carbohydrate diet.

Additionally, five Korean academic societies related to health and nutrition released a joint statement on Oct. 25 citing their disapproval of the LCHF diet.

“The reason the LCHF diet shows weight loss in the beginning stages is due to early satiety leading to appetite suppression and reduced caloric intake,” they said. “However, strict use of the LCHF diet is extremely difficult in the long-term and continued weight loss is unlikely.”

According to the Korean Academy of Family Medicine, the only one of the five academic societies that agreed to a televised debate with LCHF nutritionists on the documentary, the recommended dietary guidelines for the average Korean consists of 60 percent carbs, 15 to 30 percent fats, and 7 to 20 percent protein, which explained their doubt in the longevity of the diet. LCHF nutritionists countered by saying metabolic disease such as obesity and diabetes only increased as a result of these guidelines. 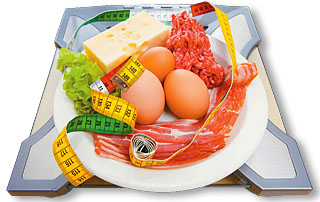 The academic societies, who were unavailable for further comment, warned that the diet may lead to health and nutritional problems, even leading to a higher risk of cardiovascular disease due to an increased consumption of LDL Cholesterol, or the “bad” cholesterol, found in fatty foods. Additionally, the increase of ketonic acids from the diet may cause adverse effects to muscle and bones due to acidification, and the reduction of glucose to the brain from reduction of carbs can cause problems involving concentration.

Professor Mark Haub, department head of food, nutrition, dietetics, and health at the College of Human Ecology in Kansas State University previously made waves in the diet industry seven years ago after his shocking 27 pound weight loss in just two months after eating a diet consisting of processed cakes, chocolate bars, and powdered donuts.

The professor wanted to prove that calories were the biggest factor in weight loss, and simple caloric restriction was the only diet necessary to achieve it.

“People have a hatred towards (processed) foods,” he said in a follow-up interview in 2011 with CNN. “I like them. I eat them. It’s amazing how people believe if it’s processed, it’s not food.”

Similar proponents of calorie restriction have made the claim that a calorie is a calorie regardless of the nutritional source, and weight loss only comes down to math: eating at a caloric deficit compared to a person’s basal metabolic rate, or the amount of energy necessary to maintain current weight. Basically, calories in versus calories out.

This style of dieting, however, runs into direct conflict with LCHF as advocated by Hong, which states that calories do differ based on its nutritional source. Still, the author remained firm in her stance on disregarding calories.

When asked which aspect of the LCHF diet was superior to its alternatives, Hong answered that it was due to its easy control of hunger.

“Other diets do not have the satiety provided by a high-fat diet,” she said. “I don’t find myself eating as often since I’m never as hungry.”

In a survey of 1,311 university students conducted by Juvis Group last year, 9 out of 10 students said they had experienced failing a diet, with 62 percent of surveyors attributing it to uncontrollable appetite.

“LCHF is just one of many diets recommended by the American Diabetes Association,” Hong said, referring the addition of a low carbohydrate diet to the association’s nutrition guidelines for eating patterns in 2013. “If the eating style doesn’t fit the dieter, they are free to pick another option.”