Popularity of ISAs peters out

Popularity of ISAs peters out 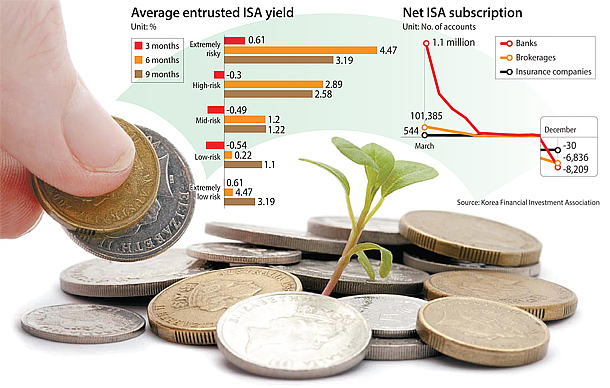 A year ago, individual savings accounts, also known as ISAs, were a hot financial product.

The accounts allowed individuals to manage their investments in multiple financial products, such as funds, derivatives and securities, through one account. When they debuted last March, 1.2 million people opened an account in just two weeks. Banks were offering giveaways of cars, overseas trips and even gold bars for people who subscribed. More than 30 financial companies were heavily promoting the accounts.

But a year later, the fever seems to have died. No major commercial banks have planned customary marketing campaigns to celebrate the product launch’s anniversary. Worse, customers are closing their accounts. As of December, net subscription of ISAs was minus-150,000, meaning more people are canceling than signing up.

Even before the launch, there were concerns about whether customers would be interested in ISAs. The accounts not only allow customers to manage multiple products in one place; there are also tax benefits. No taxes are levied on profit up to 2 million won ($1,736), and past 2 million won, the tax is just 9.9 percent, a big plus for investors considering the usual rate of 15.4 percent.

But there’s a catch: the tax benefits only kick in after five years. Many investors found the condition unappealing compared to an overseas investment fund product that rolled out around the same time and offered all profit generated from investment tax-free. The only condition was that profit was capped at 30 million won.

On top of that, people opening ISAs needed to present proof of income, another criteria that turned away investors.

Still, the biggest concern was profit. The average yield of entrusted ISAs, which are fully managed by asset managers, was 0.22 percent for low-risks products, 1.2 percent for mid-risk and 2.89 percent for high-risk as of 2016. Considering that the Kospi has risen 2.85 percent over the same period, the ISA returns are paltry.

And when that time frame is narrowed to three months, the average ISA actually suffered losses.

The Financial Services Commission, the country’s financial regulator, wants to spur interest in ISAs again. The commission plans to evaluate ISAs and their one-year performance before releasing new policies in the second half of the year to help improve the product. “We are currently negotiating with tax authorities on providing bigger tax benefits as well as looking into the possibility of easing the criteria regarding account cancellation,” a Financial Services Commission official said. The logic is that making the process of closing the account simpler might make more people sign up.

One of the ideas that the commission is looking into is easing the requirement of income proof when applying for ISAs. This could potentially expand eligible subscribers to people without income such as homemakers and senior citizens. The regulator is also mulling doubling the maximum tax exemption.

Still, some are skeptical about whether these efforts are enough to attract clients.

“The U.K. recently introduced a ‘lifetime’ ISA’ where 25 percent of contributions will be covered by the government,” a researcher at KB Financial Group’s research center said. “But since the Korean financial market is different from the U.K., it will be difficult for the Korean government to provide such bold tax benefits for ISA accounts.”

And it won’t be easy for the government to sell people on ISAs as long as the yield continues to be low. Recently, there has been a widening gap between different financial companies’ ISA performance.

HMC Investment Securities has the highest yield when it comes to high-risk ISAs.

The six-month yield of the brokerage firm’s extremely risky ISA was 9.81 percent as of the end of 2016, while its high-risk account was 7.83 percent.

Shinhan Bank ranked highest among mid-risk ISAs with 4.16 percent, while NH Investment & Securities had the strongest performance in low-risk ISAs with 2.26 percent.