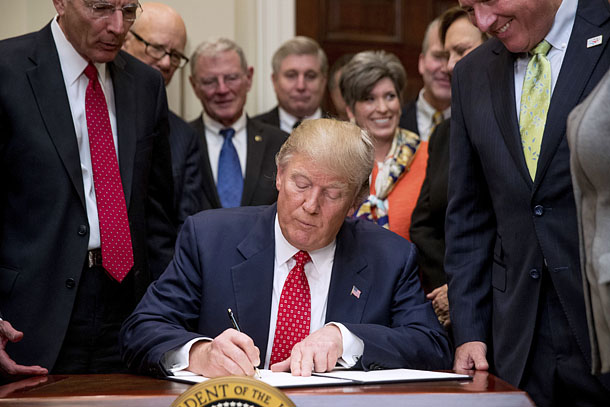 Perhaps it is just coincidence, but ever since Donald Trump became president, a series of unexpected events has happened in the United States. First in February, the New England Patriots pulled off a stunning upset against the Atlanta Falcons, coming back from a wide 28-3 lead. It was also the first Super Bowl to go into overtime.

At the 89th Academy Awards, an unprecedented mix-up happened during the Best Picture announcement. Presenters Warren Beatty and Faye Dunaway were handed the wrong envelope and mistakenly announced “La La Land” as the winner instead of “Moonlight.” This is something that has never happened.

I often hear the greeting “Any unexpected things happened?” in the streets of New York. “Unexpectedly” and “chaos” are also words that can frequently be seen in newspapers and on television. The dramatic outcome of the Super Bowl was a memorable moment in NFL history, and the confusion at the Oscars was eventually cleared, even though the producers of “La La Land” must have been disappointed. Reactions on Twitter like “Damn! I wish this happened election night” made people laugh.

But it is a different matter when unexpected chaos continues in the White House. Americans who have lived on sustainability and predictability are anxious about the chaos. The anti-immigration executive order resulted in chaos that separated even permanent residents from families. In an extension of Trump’s promise to add more jobs, the number of U.S. customs agents was increased to crack down on the country’s 11 million undocumented immigrants. Some Americans are worried that the defense budget’s expansion will result in news that a nuclear weapon has been launched with the unexpected push of a button.

It was only the beginning when Trump excluded media outlets unfavorable to him from White House press briefings. He announced recently that he would skip the White House correspondents’ dinner, a tradition that goes back a century. He adheres to C-grade communication that is bound to create chaos.

When I met Columbia University Prof. Joseph Stiglitz last week, he said he had never seen businessmen unable to speak up at a White House meeting out of fear of retaliation. The 2001 Nobel Prize in economics recipient said that Trump’s promises of economic growth were expected deception. He emphasized that elites need to stand up against Trump’s actions, which will bring chaos.

Well, this is no time to worry about the United States. We can only hope that our next president’s words and actions will be predictable.