Grown-ups want their toys, too

Grown-ups want their toys, too 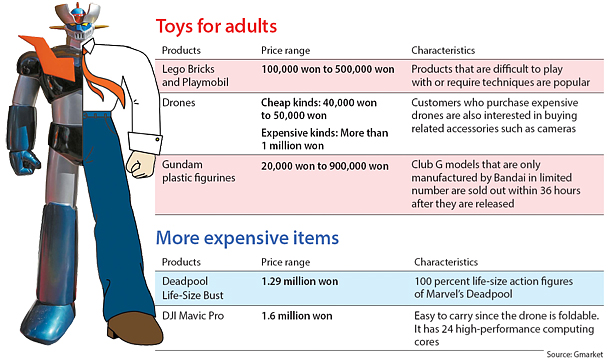 Hong, a 34-year-old employee of an IT company, has been collecting action figures for six years. His collection, mostly of characters from movies such as “Iron Man” and “Star Wars,” now numbers 50.

He once drove eight hours to buy a limited edition figure. In order to afford a 1.5 million won ($1,305) action figure, he saved money by restricting his diet to lunchboxes from convenience stores for a full month.

“I don’t have much time to spend on leisure activities and there aren’t that many things to do with my 3 million won monthly wage,” Hong said. “An action figure I bought five years ago for 500,000 won now is now worth 1.5 million won. I earn money by selling them when the prices go up.

“I also enjoy playing with them.”

In December, a Lego store opened in Hyundai Department Store’s Pangyo branch, in Gyeonggi. On weekends, people wait in line to get into an “experience zone” where they can try out various products. Some of the most enthusiastic are full-grown adults.

“Size wise, Japan is a lot bigger market because its population is greater than Korea’s,” said Bo Kristensen, general manager of Lego Korea. “But our sales are higher in Korea. This is because there are many adult customers who purchase relatively expensive products.”

Korea has a lot of kidults or adultescents - grown up people who have the tastes or hobbies of the much younger. In the past, there were only few adults who dedicated their spare time to collecting action figures or getting toy drones to stay in the air. Now kidults are considered a lucrative and growing market.

Lotte Mart opened Kidult Zones at four branches including Jamsil and Guro in Seoul and said sales at such zones rose by 12 to 17 percent annually over the past three years. The zones sell toys for adults such as popular action figures from Marvel Comics and “Star Wars.” There are about 300 kinds of toys at their stores and prices of some life-size action figures reach 9 million won.

“In the past there was high demand for expensive action figures but now many people are looking for cheap toys priced between 20,000 won and 30,000 won,” said Lee Sun-young, a manager at Lotte Mart. “The kidult market now is becoming more popularized.”

Men’s AGIT was opened in July 2015 by Lotte Department Store in its headquarters in central Seoul. The store sells drones and action figures. Average monthly sales are about 100 million won and sales have been rising at the 20 percent level this year, according to the company.

Hyundai Department Store said sales of action figures and helicams have been increasing by 25 percent annually over the past three years. “There were many people in their 20s and 30s who purchased such products in the past but now the market is growing rapidly as more people in their 40s and 50s, who tend to be more financially stable, are buying such goods,” said Choi Ji-han, a marketing director at the department store.

Online retailers are also expanding into kidult territory. Auction launched a promotion called “All about Kidult” on Feb. 22 that only sells popular action figures and Lego products. The company offers up to 65 percent cheaper prices than in brick and mortal stores.

“We will attract more middle aged customers by cooperating with offline kidult stores and museums,” said Chang Hwa-sung, a manager at Auction.

One of the biggest reasons for the growing kidult market is more adults have time to play with toys due to the stagnant economy. And more men are buying such goods than in the past.

Bachelors are particularly enthusiastic about the adult toys.

“There is a greater number of single men nowadays and they are open to spending their money on themselves,” said Chung Yeon-seung, a business management professor at Dankook University.

Some argue that adults need more things to do in their free time.

“In Korea, drinking is the usual thing that adults do to enjoy their free time,” said Kim Young-eik, an economics professor at Sogang University. “Adults are buying toys nowadays as they feel nostalgia about their childhoods, and want to spend their free time well.”

The market is expected to grow. Japan’s kidult market has grown significantly in recent years, with more products available than in Korea.

“Sales from products for adults account for 20 percent of our total sales and kidults have become key customers for the toy industry,” said Kristensen, general manager of LegoKorea.