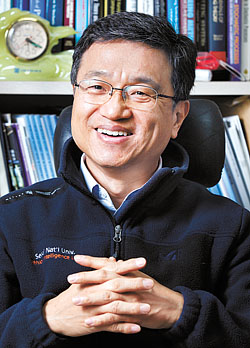 Seo Seung-woo, a professor at Seoul National University, said Thursday that the lack of support for developers is hurting self-driving technology. [PARK SANG-MOON]

The Renault Samsung SM6 sedan equipped with partially autonomous driving technology is poised to roll out on the streets of Yeouido, western Seoul in the first half of this year.

The car, called SNUvi, will be tested in the form of free taxi rides to residents. It was developed by a 20-member research team at Seoul National University.

SNUvi, a brother to the first and second versions of SNUver, carried out on Hyundai Motor’s Genesis, will be the research team’s first car operating off campus. The Transport Ministry lifted bans on operation of autonomous vehicles in metropolitan areas in November.

Seo Seung-woo, a professor of electrical and computer engineering at Seoul National University who also heads the Intelligent Vehicle IT Research Center, says the ease on regulations means a lot to researchers who need as many opportunities as possible to test self-driving technology in real situations.

Still, in a recent interview, the professor said the government’s diverse regulations on autonomous cars and lack of support for developers are slowing the industry as a whole. Below are edited excerpts from the interview:

Q. Can you explain the different approaches to developing self-driving technology?

A. One is an evolutionary approach taken by most business entities in Korea associated with driverless car technology and the other is a radical one which my research team is trying to pursue. The evolutionary approach includes most of the partially autonomous driving technology known to the public now, such as the advanced driver assistant system known as ADAS and smart cruise control, all of which help the driver to drive more smartly. However, a fully autonomous vehicle means the car contains no driver. That is what we want to approach as researchers. However, most of the government regulations and policies, move in line with the evolutionary approach taken by the automakers. It tends to focus only on short-term goals.

How does it hinder the long-term goal?

The biggest difference in terms of policy with fully autonomous vehicles is when an accident takes place. The Level 2 technology, which is what’s commercialized now, walks a fine line between whether the accident should be held responsible to the driver or the carmaker. But in the case of Level 4, the responsibility lies all on the automakers which is why they are trying to push the due date of the full autonomous car as far as they can.

What was the hardest part in developing self-driving technology?

The fact that we couldn’t test the car on real roads, which is critical when you are going for commercialization of fully autonomous car. The government’s support to boost connected car technology has been so far focused on developing auto parts instead of software or changing regulations. It wasn’t about establishing test beds in certain areas. In the U.S., which is four to five years ahead of Korea in terms of connected car technology, there are at least 40 regions where you can freely test self-driving cars.

What is the problem with supporting manufacturing auto parts instead of operation?

It will delay the time slot for autonomous car’s commercialization. Developing the hardware for self-driving means only that vehicle is able to be driven autonomously. In order for the combination of the software and hardware to be proven for mass production, it will take a long time. But if you focus on the software that can be implemented on a general platform, testing it and commercializing it would become much faster. The global trend is focusing on the software but Korea lacks a bunch in this sector. In fact, Korea is going in the opposite way. We have to put more emphasis on software.

What is needed to move up the timeline for commercialization?

We have to focus on the long-term plan, taking into consideration how the public feels about driving a self-driving car and how the traffic regulation is going to be revised. But under the current situation where every focus lies on launching a slightly more developed autonomous driving technology and then selling it at a higher price, it is not possible to think of such issue.

What will come next after demonstrating SNUvi?

My goal is to develop technology that enables a car to drive just like a human in any kind of situation with logical behavior and flexibility. I assess that SNUvi has achieved 70 percent of it. Next year, I hope to elevate the rate to 80 percent.