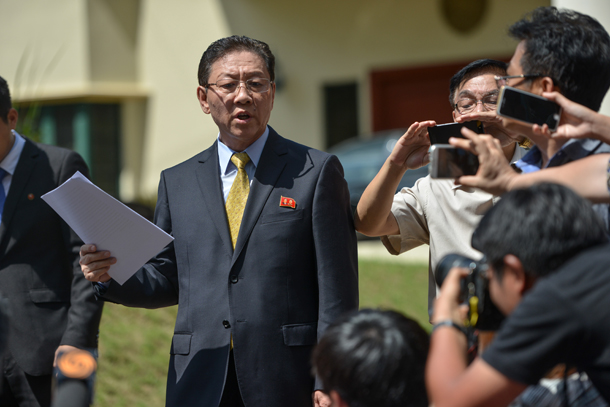 The Malaysian government declared North Korea's ambassador persona non grata Saturday and gave him 48 hours to leave the country, saying the measure was part of a process to "review its relations" with the communist regime.

Anifah Aman, Malaysia's foreign affairs minister, clarified in a statement that persona non grata literally meant "person not appreciated," and that North Korean Ambassador Kang Chol has been barred from entering or remaining in the country, according to The Star, a newspaper in Malaysia.

He was given until Monday 6 p.m. to depart.

"It is the most serious form of disapproval that the country can apply to foreign diplomats," the minister said.
Ambassador Kang has yet to publically react to the decision.

Malaysia's move, which takes it one step closer to severing diplomatic ties with North Korea, is said to have come after Kang failed to comply with a summons from the Malaysian Foreign Affairs Ministry. He was ordered to meet with the ministry's deputy secretary general for bilateral affairs at 6 p.m. Saturday but did not show up.

The ministry said it sent a note to the North Korean Embassy in Kuala Lumpur ordering Kang to leave.

Malaysia's frustration with Kang grew after he refused to submit a written apology to the ministry for accusing Malaysian authorities of "colluding and playing into the gallery of external forces" in the assassination probe of Kim Jong-nam, the estranged half brother of North Korean leader Kim Jong-un, in order to "besmirch" the image of the North.

Kang also accused Malaysian police of "trying to conceal something."

"It should be made clear — Malaysia will react strongly against any insults made against it or any attempt to tarnish its reputation," Malaysia's foreign minister said, according to The Star.

Malaysia already ended visa-free entry for North Koreans, citing concern that the country was used for illegal activities. That measure was announced last Thursday by Malaysia's deputy prime minister and is scheduled to go into effect today.

The scrapping of the eight-year agreement is expected to undermine North Korea's economic activities in Malaysia. Around 1,000 North Koreans are working there.

Ri Jong-chol, a former suspect in the killing of Kim Jong-nam, annoyed Malaysian authorities even more Saturday when, after being deported from the country, he told a throng of reporters outside the North Korean Embassy in Beijing that he was a "victim of a conspiracy" by the Malaysian government.

Ri, who was released after Malaysian police concluded they couldn't find enough evidence to charge him in the murder, said he was "coerced" to give a false confession, and that officers threatened to harm his family unless he admitted he killed Kim Jong-nam on Feb. 13 at Kuala Lumpur International Airport.

Khalid Abu Bakar, inspector-general of the Malaysian police, refuted the accusations Saturday in an interview with The Star, saying Ri was "treated well" and that Malaysian police "followed strict standard operating procedure in a murder investigation."