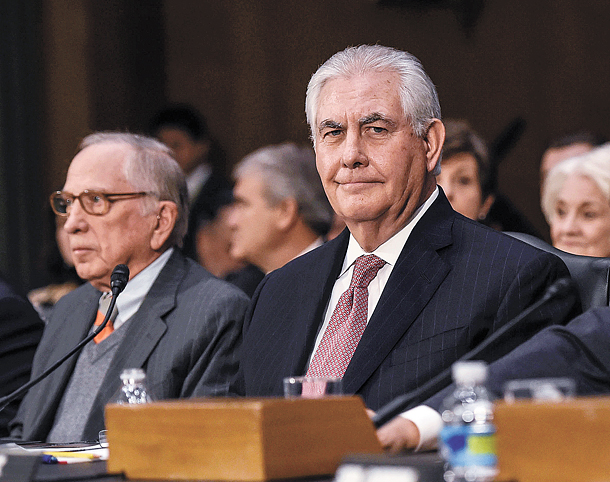 U.S. Secretary of State Rex Tillerson will visit Tokyo, Seoul and Beijing later this month to discuss possible countermeasures against North Korean provocations, multiple sources in Seoul and Washington told the JoongAng Ilbo, an affiliate of the Korea JoongAng Daily.

Tillerson will first visit Tokyo around March 17, said a U.S. government official last Friday. Details of the rest of his itinerary has not been decided.

Washington, Seoul, Tokyo and Beijing have not made official statements on the meetings yet.

Tillerson’s visit will come shortly after U.S. Secretary of Defense James Mattis came to Seoul in early February, his first overseas destination after assuming office, a signal that the Donald Trump administration was focusing quickly on the North Korea situation.

The U.S. government source said Tillerson’s three-leg tour had been decided only recently, and that the Trump administration will likely use the outcomes of the upcoming discussions to frame its North Korean policies.

Pointing out that the key phrase of the tour will be “North Korea,” the official said that Tillerson will lead open discussions on how the former Obama administration failed to curtail Pyongyang’s nuclear ambitions.

Other issues will be the possibilities of the North test-launching an ICBM or carrying out a sixth nuclear experiment.

Discussions of countermeasures could include a preemptive strike, the source said.

In Beijing, Tillerson will highlight the fact that the U.S.-led Terminal High Altitude Area Defense (Thaad) system South Korea is expected to deploy in coming months will be used solely against North Korea, according to the source in Washington.

That message, he continued, will be conveyed alongside firm requests from the U.S. not to retaliate against South Korea.

It remains to be seen how much time Tillerson will actually spare on Thaad-related discussions. The Chinese government ordered Chinese travel agencies last week to stop selling tour packages to Korea, both group and individual, from March 15.

Sources in China told the JoongAng Ilbo that the China National Tourist Office handed down the order last Thursday during a meeting with travel agency executives. Nearly half of all foreign visitors to South Korea last year were Chinese.