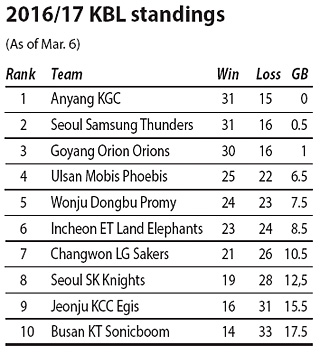 After losing three consecutive games, the Seoul SK Knights got back on track as the team won two of its games over the weekend.

Although the team was down two of its key players, Kim Sun-hyung and Choi Joon-young, due to injuries, they still managed to show strong performance on the court.

The Knights ended their losing streak by winning against the Busan KT Sonicboom 82-75 on Friday.

On Sunday, the team won against the Ulsan Mobis Phoebis, the fourth-ranked team in the league, 64-57 on Sunday.

With the wins, the Knights now improve their record to 19 wins and 28 losses for the season, but the team remains eighth overall.

The Knights are struggling to make their way back up to the top of the league as their ranking dropped significantly compared to their performance in the 2012-2013 season, when they were first in the league. Once the team reached the top spot, they slowly dropped and were ranked second-to-last in the league last year.

The Knights will host the Incheon ET Land Elephants, sixth in the league, on Thursday at 7 p.m.