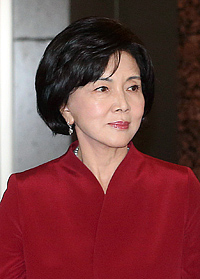 Hong Ra-hee has resigned as director of the Leeum, Samsung Museum of Art for unspecified “personal reasons,” the nation’s biggest private art museum said in a sudden statement on Monday.

Hong, one of the most influential figures in the Korean art scene, is the wife of Lee Kun-hee, the bedridden chairman of Samsung Electronics, and the mother of Lee Jae-yong, vice chairman of the electronics company and the de facto leader of Samsung Group.

“For now, we know nothing about the background of her resignation,” a public relations official of Leeum said by phone. “The successor has not been decided. For the time being, Senior Deputy Director Hong Ra-young and Deputy Director Lee Joon will together operate the museum.”

The senior deputy director is a younger sister of the former director Hong.

Lee Jae-yong was arrested on Feb. 17 on charges of bribery and other offenses in the scandal that led to President Park Geun-hye’s impeachment in the National Assembly.

Industry sources say Hong might have felt too stressed out to carry on her responsibilities as museum director, which demands an active social life, while her husband has been bedridden for three years and her son is behind bars.

Additionally, Hong is also stepping down as the director of the Ho-Am Art Museum,

The museum, which opened in 1982 in Yongin County, Gyeonggi, houses Korean art pieces collected by Samsung founder Lee Byung-chull (1910~87), who was her father-in-law. She became head of the museum in 1995.

She took the top job at Leeum in October 2004 when it opened in Yongsan District, central Seoul.

In 2008, Hong left Leeum and Samsung Culture Foundation amid prosecutors’ investigation into a slush fund scandal at Samsung and returned to her job in March 2011.’

Hong graduated from Seoul National University, majoring in applied arts. She topped the list of the most influential figures in the Korean art scene in the annual survey by the Korean Art Appraisal Association from 2005 to 2009 and from 2011 to 2012.