How China’s retaliation may come back to bite it

How China’s retaliation may come back to bite it 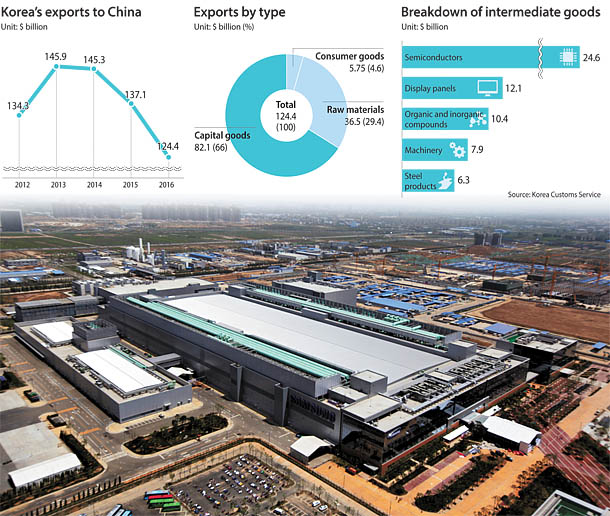 In the past few months, trade restrictions imposed by China on Korean companies in apparent retaliation against the South Korean government’s decision to deploy an American missile defense system in Korea has raised concerns about a possible trade war between the two Asian neighbors.

But many experts have brushed off such worries, arguing that a protracted conflict would be damaging to both sides. That’s because many Chinese companies heavily depend on Korea for raw materials and components.

Take Huawei for example. The Chinese electronics maker assembles smartphones using semiconductors from Samsung Electronics. These chips are one of the most important components in a smartphone, often called the brain of the system. There are few companies in China that can produce high-quality semiconductors, and even fewer that can do so at Samsung’s scale in such a short period of time, so many smartphone makers like Huawei have to import them from abroad. China will be hard-pressed if it tries to limit imports of semiconductors.

As much as Korea is dependent on China as its largest trading partner, China relies on Korea for the bulk of its intermediate goods. Last year, 45 percent of Chinese manufacturers’ raw materials and capital goods came from Korea. Capital goods made up 66 percent of Korea’s exports to China last year, according to data released by the Korea Customs Service on Sunday. This includes key components like semiconductors (20 percent) and display panels (10 percent).

Another 29.4 percent were raw materials like steel and chemical products. Consumer goods like automobiles and cosmetics, on the other hand, only accounted for 4.6 percent of Korea’s shipments to China.

Both economies stand to lose a lot in a trade war. One of China’s key industries is processing intermediate goods into final products for sale in both local and global markets. These consumer products make up a quarter of the country’s exports.

Chinese manufacturers need Korean intermediate goods to produce final goods. In particular, it is difficult for Chinese manufacturers to find other suppliers for electronics and machinery since there aren’t many local companies that can produce high-quality products at reasonable prices like Korean companies.

On top of that, many intermediate goods from Korea end up going to Korean manufacturing plants operating in China. It is inevitable that such plants will have to cut down on the number of Chinese workers if their business weakens from trade retaliation. It would no doubt be a significant burden for the Chinese government as one of the country’s major concerns is a weak labor market.

“It is hard for China to retaliate economically since there are not many countries from which China can buy key materials like semiconductors,” said Sim Sang-ryul, an international trade professor at Kwangwoon University in Seoul. “Therefore, much of the trade retaliation will take place in areas like tourism, cosmetics and online shopping, which appear to be big to many people but actually have limited effects on the economy, since they represent a small part of the economy.”

Many trade experts recommend the Korean government maintain a calm position toward China, even as Beijing continues to express its disapproval of the South Korean government’s decision to deploy the controversial American missile defense system known as Thaad.

“The two countries’ economies are already very interdependent, which means China can’t just cut economic ties with Korea due to political issues,” said Yu Byoung-gyu, president of the Korea Institute for Industrial Economics and Trade. “The Korean government should use this as leverage and make sure that political and diplomatic issues won’t have negative impacts on the economy.”

The Korean government plans to hold a meeting on Tuesday to discuss China’s recent trade actions, which have included stopping Korean imports at customs and heightened inspections of Korean companies operating in China.

“We will monitor closely and take as much action as we can take to help Korean companies avoid unfair measures by China,” Korean Trade Minister Joo Hyung-hwan said. “We will even consider appealing to international organizations including the World Trade Organization if China violates global trade laws.”

Korea’s foreign minister, Yun Byung-se, warned that China’s economic actions against Korea could be in breach of WTO rules and the free trade agreement between the two countries. He added that he would closely watch China’s trade moves.