Gov’t-backed debt will be allowed write-offs

Gov’t-backed debt will be allowed write-offs 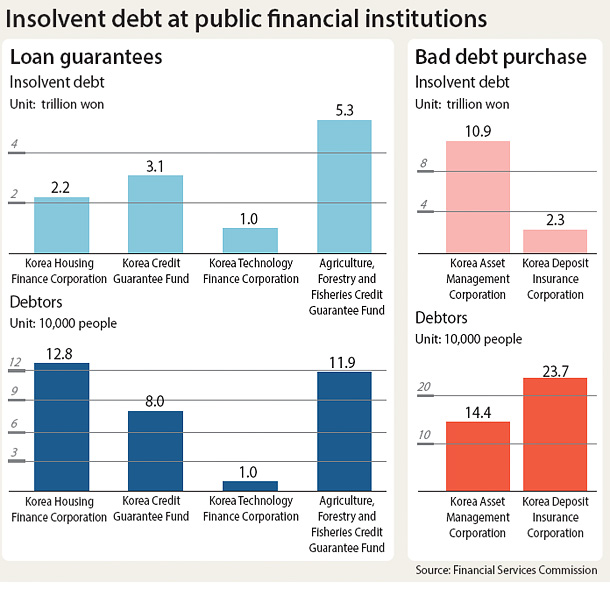 The Financial Services Commission on Monday said it would devise measures to ease the debt burden of low-income borrowers struggling to pay back loans.

One move includes a debt readjustment plan in which public financial institutions will be allowed to write off 60 percent of debt that they are backing. In the case of a debtor who took out 30 million won ($26,010) guaranteed by a public institution, this would mean his monthly debt payment for the next eight years will be halved to 200,000 won.

Under the current system, which does not allow write-offs on loans backed by public financial institutions, that debtor would likely have given up on repayment.

The proposed change allows debtors who have requested a workout on debt guaranteed by a public financial institution and that is overdue by more than a year to get their debt readjusted. Only those with assets exceeding 5 million won will be excluded from this plan.

In particular, the statute of limitations on debt will be not extended for those who owe less than 2 million won or those aged 70 and up.

Additionally, the government will suspend principal and interest payments on such loans for a maximum three years if the debtor is unable to repay due to severe injury or job loss. The government’s goal is to aggressively clear insolvent debt and completely transfer it to the Korea Asset Management Corporation.

Unlike private commercial banks, which write off insolvent debt considered impossible to recollect in a year, public financial institutions have been passive in clearing insolvent debt, the Financial Services Commission said. These institutions would hold on to the debt for as long as 15 years, which has had the effect of limiting debt adjustments. Borrowers with low income and bad credit have struggled the most, finding it difficult to pay back the principal, let alone the interest.

While the size of this debt is 62 percent of the 40 trillion won in unrecoverable loans at private financial institutions, including banks, public institutions have been less aggressive in writing off the debt.

“Considering that most of the people who use government finance are those in middle- and lower-income households, the management of insolvent debt at public financial institutions is a very important project for our economy,” said Jeong Eun-bo, vice chairman of the Financial Services Commission, during a meeting held at the main government complex in central Seoul on Monday. “Our goal is to take a step forward from the formality of recovering and holding debt to aggressively adjusting and clearing them.”

Jeong added that the target is to secure efficiency in debt management by boldly getting rid of insolvent debt considered irredeemable while swiftly collecting when debtors have the ability to pay back using personal assets.

The government plans to complete improvement of the debt rescue measures by the end of June and implement them in the third quarter.

Additionally, the government plans to create a data system where all insolvent debt at public financial institutions can be monitored by the end of this year.