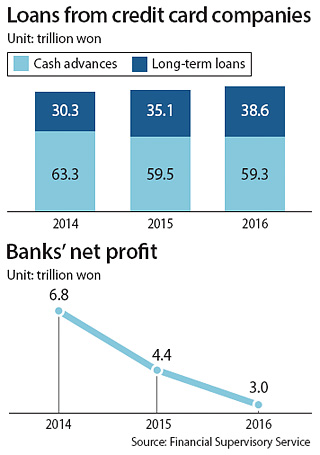 As the government continues to tighten lending guidelines in an effort to curb rising household debt, borrowers in Korea are turning to other options to meet their needs - including taking out loans from credit card companies.

While cash advances fell slightly to 59.3 trillion won from 59.5 trillion won in 2015, the amount of long-term loans issued by credit card companies more than made up for the loss, growing 10 percent to 38.6 trillion won. These loans are similar to those issued by commercial banks, but they’re often easier to get because they are given to credit card holders. The interest rate is generally higher than commercial bank loans but lower than many other lending options.

“Just a few years ago, there were a lot more cash advances,” said Lee Sang-min, a manager at the credit supervision department of the Financial Supervisory Service. “But more people are turning to card loans instead these days. This is because the annual interest rate on card loans on average is lower, at about 15 percent, while that of cash advances is about 20 percent.”

Lee added that the long-term nature of card loans made them more appealing than cash advances.

Such a trend is in line with recent Bank of Korea data that showed loans from noncommercial banks, also known as second-tier lenders in Korea, was on the rise from the third to fourth quarter last year.

The data indicated that while loans from commercial banks fell, those by second-tier lenders climbed up. Among them, loans by credit card companies and consumer finance companies rose about 2.9 trillion won during that period, more than at savings banks and credit cooperatives which went up by 2.4 trillion won.

“Loans in general rose in 2016, and people who owned credit cards must have preferred loans by card companies over other lenders such as savings bank since they are more reliable,” Lee said. “So along with the overall rise in the amount of loans, the demand for card loans must have been higher than loans from savings banks or other lenders who are less reliable.”

Despite the higher card usage by the public, net profit at Korea’s eight card companies actually fell by 9.9 percent to 1.8 trillion won. “Such a loss in profit occurred due to marketing costs and costs from non-collectible accounts, which skyrocketed,” the Financial Supervisory Service said in its report.