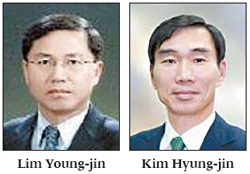 Lim will be in charge of the credit card company, while Kim will head the securities firm.

“Lim has in-depth understanding of the card business as he has been in charge of synergy strategy within the group,” the company said in a statement. It added that the committee valued Lim’s communication skills with parties both inside and outside the group, a skill they said was necessary in reacting to current market developments like big data and fintech.

Lim joined Shinhan Bank after graduating from Korea University with a degree in business administration in 1986. He held various leadership positions within the bank, including serving as branch manager in Osaka and a brief stint as the bank’s acting president in 2015.

Lim will take over Shinhan Card, which recorded 715.9 billion won ($620 million) in net profit last year, up 3 percent from a year earlier.

Kim, who will take over Shinhan Investment, once served as chief of Shinhan Data System, a subsidiary that provides financial IT services. The committee praised him for his “in-depth understanding of financial investment” after serving as a non-executive director at the securities firm.

Kim takes over Shinhan Investment after the company had a disappointing year, with net profit falling 46.4 percent to 115.4 billion won.

The nominees will assume their respective offices upon approval from shareholders later this month.