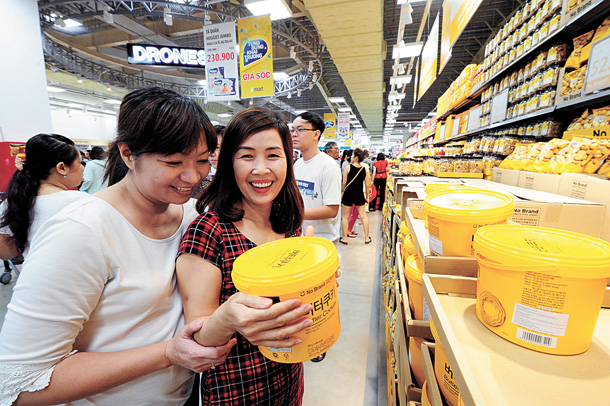 A customer holds up a bucket of E-Mart’s No Brand butter cookies at a branch in Go Vap District, Vietnam. Opened in December 2015, the location was E-Mart’s first brick-and-mortar store in Vietnam. [E-MART]

Korean discount chain E-Mart unveiled a plan on Monday to increase exports by 65 percent to 53 billion won ($46 million) this year, with the ultimate goal of hitting 100 billion won by 2018.

The retailer already began shipments to the Philippines in January and is preparing to start exporting to Japan, England, Thailand and Taiwan between late March and April. This will increase the number of export countries to 15 by this year’s first half.

“In the second half, we’re talking with companies in Uzbekistan, Russia and the Netherlands,” said Shim Jin-bo, a manager at E-Mart’s global business team. “The goal is to reach 20 countries by the end of this year.”

Last year, the retailer raised 32 billion won from exports to 10 markets including China, Hong Kong, the United States, Singapore and Australia. Its sales grew 100 times compared to 2013, when it first began exporting products to Hong Kong. 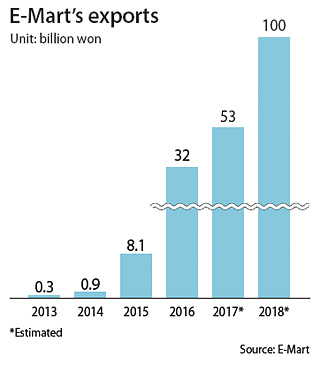 The government last year named the top Korean discount chain a “certified trading company,” a title that is only granted to companies that achieve over $1 million in exports in a year. Another mandatory requirement is that among the exported products, over 30 percent has to be from other companies. E-Mart was the first discount retailer to gain the title.

The company’s overseas advancement is not only beneficial for E-Mart but also for its suppliers who fill the discount chain’s shelves. Around 45 percent of all sales earned from exports last year were generated by products from small and midsize companies. E-Mart wants eventually to increase this to 50 percent.

In January, E-Mart began sending Korean-grown fresh food to Mongolia via plane. This will likely benefit Korean farmers, whose revenue mostly comes from the domestic market.

“Expanding our global sales channel is a good opportunity to generate networks and accumulate know-how in global exports through which we can introduce quality products in Korea,” E-Mart CEO Lee Gap-su said.