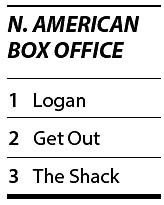 NEW YORK - The R-rated “X-Men” spinoff “Logan” slashed into the weekend box office, opening with a massive $85.3 million in North American theaters, according to studio estimates Sunday, while best-picture winner “Moonlight” got a significant, if far from superhero-sized, Oscar bump.

Last week’s No. 1 film, Jordan Peele’s horror sensation “Get Out,” slid just 22 percent - a small drop for any movie but particularly in the horror genre. The acclaimed Universal Pictures release, made for $5 million by Blumhouse Productions, dropped to second place but still grossed $26.1 million. Its 10-day total is $75 million.

The Oscar best-picture winner “Moonlight” had its widest release yet, appearing on 1,564 screens. It turned in its biggest weekend, too, with an estimated $2.5 million. That accounts for roughly 10 percent of the movie’s total domestic haul of $25.3 million. “Moonlight,” made for just $1.5 million, is also out on DVD and on-demand. Indie distributor A24 said it will be its highest-grossing release in its five-year existence.

“That’s a true Oscar halo effect in full view,” said Paul Dergarabedian, senior media analyst for comScore. “Usually the biggest bounce comes from the nominations. But this film hadn’t made a ton of money. A24 smartly expanded into more theaters, and it really worked for them.”

Lionsgate’s “The Shack” also opened in North American theaters over the weekend and came in third with $16.1 million. The Christian tale was slammed by critics but attracted one of the largest faith-based audiences in recent years. AP