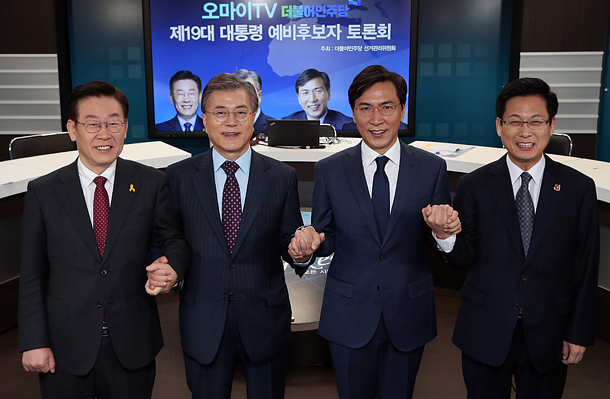 More than 1.4 million people have registered to vote in the Democratic Party’s primary to elect its nominee, fueling expectations among party candidates trailing frontrunner Moon Jae-in that a large number of people outside the party will take part in the nomination process in favor of them.

Since beginning voter registrations from non-DP members on Feb. 15, the party has amassed 1.41 million registrations as of Monday.

Party insiders estimate the total number of DP members and supporters to be around 1.3 million, and the current pace of voting registration is seen by many as a sign of great public interest in the DP nomination process, with the possibility that the winner of the presidential election may be the DP nominee.

If a large number of non-DP members take part in the primary, it could boost chances for South Chungcheong Governor An Hee-jung and Seongnam Mayor Lee Jae-myung, who are both trailing Moon, because Moon commands strong support from ardent DP members and supporters.

For this year’s primary race, the DP is allowing non-party members to take part in the nomination process, as long as they register beforehand.

Considering the DP has an estimated 195,000 party delegates and members, who are automatically registered to vote, around 1.2 million without party affiliations have so far signed up.

The party will continue receiving voting registrations in the first round until the Constitutional Court’s ruling on an impeachment motion against President Park Geun-hye.

With rising expectations that the court will deliver its decision concerning the president by the end of this week before acting chief Justice Lee Jung-mi resigns from the current eight-member bench next Monday, the DP is hoping to garner well above 1.5 million registrations in its first round.

The party will begin its second round of voter registration for the 10 days following the court’s ruling date, should President Park be forced from office, which will be the first time for a president to be removed through impeachment in Korean history.

With the pace at which the DP is getting registrations, the party is aiming to garner as many as 2.5 million primary participants by the end of the second round.

“On the stump, we feel a strong sense of support pouring in for the mayor,” said one aide to Seongnam Mayor Lee, who asked not to be named. “There are many Lee supporters who are just too shy to openly express their support online (but will vote in the primary).”

A campaign staff member working for Governor An told the JoongAng Ilbo that many in South Chungcheong were intent on taking part in the primary to vote for the 52-year-old candidate.

While it remains to be seen whether large turnouts by those outside the DP will work in favor of the candidates, Moon has kept a firm grip on the lead. In a Realmeter poll released Monday, Moon led with 36.4 percent of support.

Prime Minister Hwang Kyo-ahn, who is acting president, came in second with 14.9 percent, followed by An with 12.6 percent. Rep. Ahn Cheol-soo of the People’s Party and Mayor Lee followed with 10.8 and 8.9 percent each. The poll was conducted from Monday through Friday of 2,025 adults nationwide.