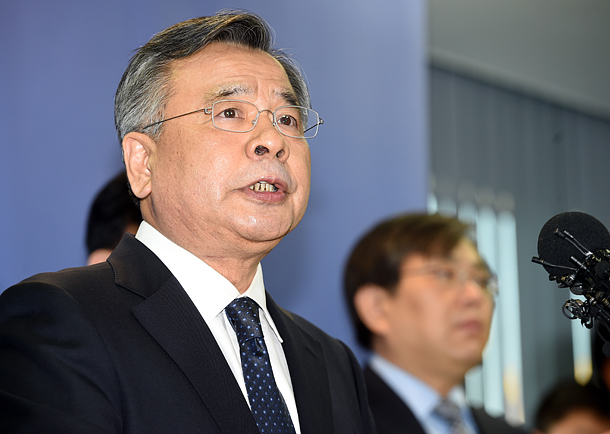 Independent counsel Park Young-soo holds a press conference on Monday to announce a 90-day probe into the massive corruption scandal that led to the president’s impeachment in December. [YONHAP]

President Park Geun-hye is a suspect who received massive bribes from Samsung Group in collusion with her longtime friend, an independent counsel said Monday, unveiling a dozen other charges against her after a special investigation.

Independent counsel Park Young-soo made the announcement of a 90-day probe into the massive corruption scandal that led to the president’s impeachment in December. Park said the president was identified as a co-conspirator of the Samsung bribery allegation and the case was handed over to the prosecution for further investigation.

The amount of bribes is 43.3 billion won ($37.4 million), including the money that was promised to be paid, the independent counsel said.

In November, the prosecution indicted Choi and An Chong-bum, a former presidential aide, on charges of coercing 53 companies, including Samsung, to donate 77.4 billion won ($65.76 million) to the two nonprofit foundations. The prosecution said Choi and An acted “in collusion with the president,” but did not apply the bribery charge against Park and her associates.

At the end of both probes, Park was not indicted because of her presidential immunity. The Constitutional Court held a trial for the past months and the decision on whether to permanently remove her from office is imminent.

Samsung and its vice chairman, Lee, has consistently argued it was a victim, not a suspect. They said it was unavoidable to support Choi due to the president’s intimidation. Park claims Samsung made the contributions voluntarily.

The independent counsel also confirmed that Park was the highest authority who ordered the creation and execution of a blacklist of cultural figures and artists critical of her administration. The list included more than 9,500 artists.

Park was accused of abusing her power to order demotions of public servants in the Ministry of Culture, Sports and Tourism. The cases were sent to the prosecution for further probes.

According to the independent counsel, she abused her power as president to get promotions for Choi’s associates.

Park was also accused of leaking confidential government information to Choi through her secretary, Jeong Ho-seong, from January 2013 until April 2016. At least 47 accounts of leaks were confirmed, the independent counsel said, and asked the prosecution to further look into it.

The independent counsel went after a suspicion involving Park’s whereabouts on the day of the Sewol ferry’s sinking on April 16, 2014, but failed to find a definite answer.

“It was not confirmed yet what Park did during those seven hours,” independent counsel Park said. “We needed to investigate the possibility that she was receiving cosmetic treatment, but we could not confirm it because our plans for the Blue House raid and a face-to-face questioning of the president were not realized.”

Nevertheless, it was revealed that she received unlawful medical treatments from outside visitors. Kim Young-jae, a plastic surgeon who treated Choi regularly, made at least 14 secret visits to the presidential residence in the Blue House from December 2013 until September 2016, whose treatments included more than five Botox injections.

Outside doctors secretly visited the president at the residence without the knowledge of the presidential doctor or the head of the Blue House medical office, the independent counsel said. Park’s blood was also taken outside without authorization.

The independent counsel team looked into suspicions surrounding the massive wealth of Choi and her family. Choi is a daughter of Choi Tae-min, a late cult leader and Park’s mentor, and speculators were high that the Choi family used illegal means to accumulate their wealth.

The team confirmed that the family owns about 270 billion won, but no evidence was found that they accumulated their wealth illegally. “We did not have enough time to go after the illegal wealth creation and concealment,” the independent counsel said in its investigation report.

“Key witnesses have also died, so there was a limit in our investigation.”

Park’s lawyer, Yoo Yeong-ha, issued a statement on Monday to deny all charges against the president, questioning the integrity of the independent counsel. “The independent counsel and his assistants were recommended by opposition parties, and the fairness of the probe was impossible from the beginning,” he said.

In November, President Park selected Park Young-soo, former head of the Seoul High Prosecutors’ Office, as independent counsel from among two candidates the opposition parties recommended, based on the ruling and opposition parties’ agreement.

“In order to serve the independent counsel system, political neutrality and fairness must be guaranteed,” Yoo said. “But the principle of the division of powers was violated because the Democratic Party and the People’s Party were given the control over the legislature.”

Independent counsel Park, during his press conference earlier in the morning, rejected the notion of his team’s political bias. He also denied suspicions that he decided to wait a week to announce the outcome on Monday, although the investigation ended on Tuesday, for political effect. Critics said he wanted to influence the Constitutional Court’s deliberation.

“We had to complete the indictment processes of Lee and Choi and hand over reports and remaining cases to the prosecution,” said Park.

“The work was too much, and it was impossible to announce the outcome on the final day of the investigation.”

He also noted that the Park administration denied his request for an extension on Feb. 27, one day before the probe’s deadline.

“Because of the impeachment and other circumstances, our announcement could trigger a misunderstanding,” he said. “Therefore, we made the briefest possible announcement.”

Lee, who acted as the spokesman for the team during the probe, did not take any questions from the press.