A near-perfect record for Wibee

A near-perfect record for Wibee 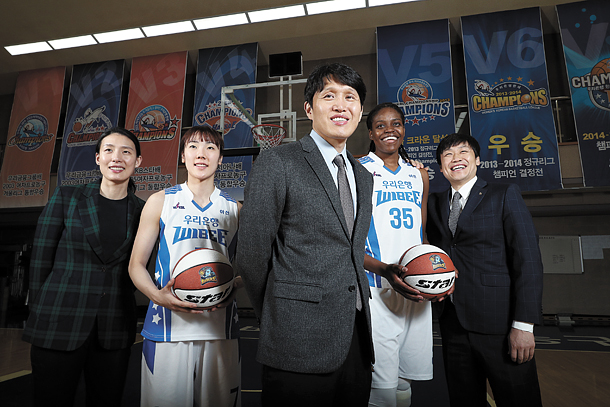 The Asan Woori Bank Wibee have ended the Korean women’s basketball season with a near-perfect winning percentage of 94.3 percent.

It not only breaks records in the Women’s Korean Basketball League, but it’s the best performance of any team in Korean professional sports history.

The Wibee’s final game of the regular season was against the Yongin Samsung Life Blue Minx on Monday, and they crushed the opposing team 72-55. With the win, the Wibee concludes its season with 33 wins and two losses, topping the previous record holder, the Incheon Shinhan Bank S-Birds, who in the 2008-09 season notched 37 wins and three losses, a 92.5 percent winning percentage.

The Wibee have outperformed their male counterparts by miles. The best record in the men’s Korea Basketball League, held by two teams, is 81.5 percent, which the Wonju Dongbu Promy achieved during the 2011-12 season and the Seoul SK Knights tied in the 2012-13 season.

And even when compared to other sports in Korea, the Wibee are unmatched. In volleyball, the best V-League performance is 90 percent, a record currently held by the Cheonam Hyundai Capital Skywalkers and Daejeon Samsung Bluefangs. In football, the K League record is 79.3 percent, set by the Suwon Samsung Bluewings all the way back in 1999. The Wibee’s record is leagues better than the best-performing team in the Korea Baseball Organization, the Samsung Lions, who scored 70.6 percent wins in 1985. The Wibee are now gearing up for the championship series, which begins on March 16. The team hopes to once again top the championship and regular season, a feat it has managed to achieve for four straight years. Well before its final game on Monday, the Wibee had already been confirmed the regular season winners on Jan. 28, more than a month before the end of the season. The title came after just 25 games, the fastest record in league history.

With such numbers, it’s easy to let the success get into their heads. But the Wibee aren’t letting up. They say they’ll try their hardest in the championship series, just as they’ve been doing since the beginning of the season. “Most of the players are at their best now,” said Wie Sung-woo, head coach of the Wibee, after winning against the Cheongju KB Stars 78-60 last Friday. Wie showed strong confidence in the team heading into the championships.

The Yongin Samsung Life Blue Minx, second in the league, will play against the KB Stars, third in the league, this weekend for a chance to face the Wibee in the championship series.

There are five games in the championship series, and the team that wins the first three will be crowned champion.