Pyeongchang counts down to Paralympics

Pyeongchang counts down to Paralympics 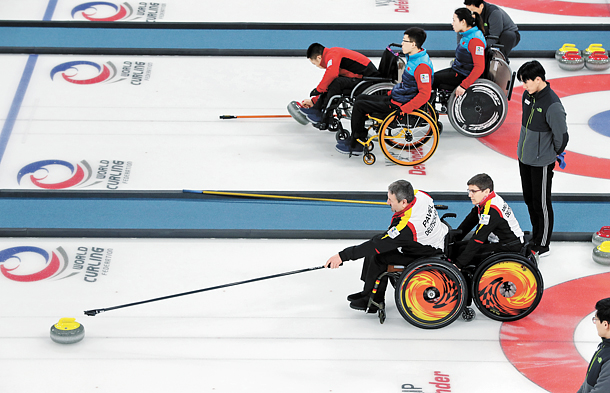 The countdown to the first Winter Paralympic Games in Korea will reach one year on Thursday, with homegrown athletes eyeing the country’s first gold medal at the multisport competition for disabled athletes.

Pyeongchang County, an alpine resort town about 110 miles east of Seoul in Gangwon Province, will host the country’s first Winter Paralympics from March 9 to 18 next year under the slogan “Passion. Connected.”

The event follows the Winter Olympics that will be staged from Feb. 9 to 25.

The Winter Paralympic Games will take place at the same venues as the Winter Olympics. The opening and closing ceremonies, as well as most snow sports, will be staged in Pyeongchang, while alpine skiing events will be contested further east in Jeongseon County. Gangneung, a coastal city in Gangwon, will host all ice sports during the Paralympics.

The PyeongChang Organizing Committee estimates some 50 countries will send about 1,700 athletes and officials to take part in the Paralympics. They will vie for 80 gold medals at stake in six sports.

Korea plans to send its athletes to all six sports. Although the qualification process runs until June, pundits expect about 40 to 45 local Paralympians will compete.

The Korean Paralympic Committee said with home-field advantage, the PyeongChang Paralympics is a great opportunity for Korean athletes to show their best performance. The athletes will first check their skills by competing at the Paralympic test events.