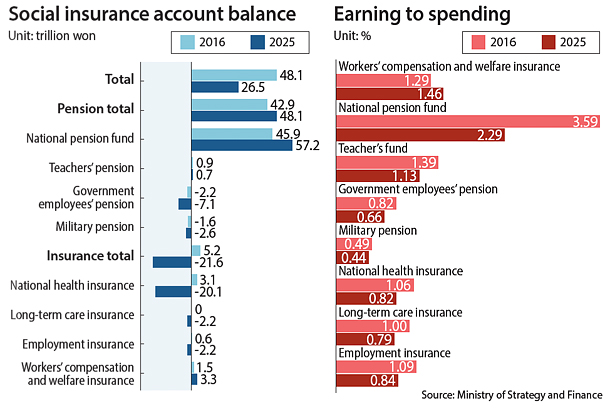 Spending on eight types of insurance including health insurance, pension funds and even employment is expected to climb to 220 trillion won ($191.8 billion) in 2025, which is double the size of spending last year.

But health insurance is expected to dry up by 2023.

The government on Tuesday said social insurance spending will dramatically increase in the next 10 years, largely due to the 7.11 million baby boomers who have begun to retire. Baby boomers were born between 1955 and 1963.

Social insurance spending last year was 106 trillion won. In the next 10 years that spending is expected to increase an average 8.4 percent annually, the Ministry of Strategy and Finance said. By 2025 it will reach 219.8 trillion won, equivalent to 9.2 percent of the nation’s GDP. Last year, social insurance spending accounted for 6.5 percent of the GDP. This is a 2.7 percentage point increase from the previous year.

“As the demographic changes caused by low birth and aging population started last year and will continue through 2025, major changes in revenue and spending of the eight social insurances will likely realize during this time period,” said Son Un-seok, deputy minister of Strategy and Finance. “There is a need of a preemptive measure that could guarantee the sustainability of social insurance in the long and mid term.”

Last year, 4.13 million retirees collected a pension. That figure is expected to reach 6.45 million in 2025. Retirees who received pensions in 2016 accounted for 38 percent of all senior citizens in the country, a figure that is expected to increase to 46 percent by 2025.

Spending is increasing not only because of the growing number of people that will be receiving a pension but also the amount that the government will have to dole out.

For those who have contributed for more than 20 years the monthly amount that they will receive will grow from 890,000 won per month to 1.13 million won in 2025.

The number of people that have been collecting three pensions also is expected to increase, adding to the larger spending. Spending on the four pensions - national pension, teacher’s pension, government employees pension and military pension - is expected to amount to 75 trillion won, more than double the 35 trillion won spent last year.

Health insurance payments per capita are expected to double from 950,000 won to 1.8 million won by 2025 largely due to rising medical bills of senior citizens.

The government forecast that employment insurance will expand 7.2 percent annually to 15.8 trillion won by 2025 due to rising wages and increasing participation in parental leave.

However, the government projected that the net surplus growth will start to decelerate significantly as spending will be growing at a much faster rate than the pension service’s revenue. In fact, its revenue to spending rate will be slowed from 3.59 percent to 2.29 percent. Health insurance will have greater spending as its revenue to spending rate will drop from 1.06 percent to 0.82 percent.

The health insurance suffered a drop in its profit last year as its investment to profit rate was 1.7 percent, down from 2.2 percent the previous year. Health insurance came second to the national pension fund as its assets amounted to 19.3 trillion won, which accounts for 3.1 trillion won of the social insurance.

The government said it plans to come up with measures to improve the social insurance including readjusting the insurance handout of the four major insurances by June.