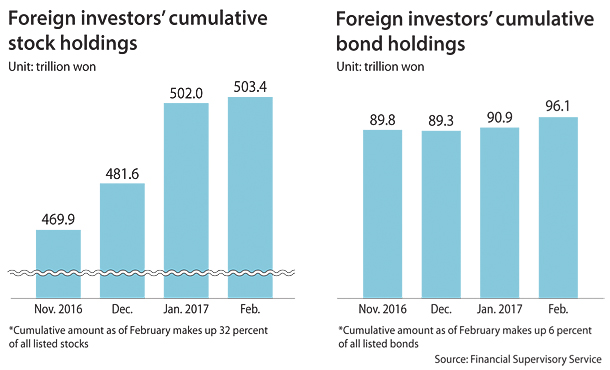 Foreigners continue to play the Korean stock market with their holdings reaching a record high in February despite not too favorable global conditions, according to the latest data provided by financial authorities.

In total, cumulative stock holdings by foreigners stood at 503 trillion won at the end of February, a record high and 31.8 percent of total market capitalization, according to the FSS. In terms of bonds, foreign investors held a total of 96.1 trillion won, about 6 percent of the total.

Foreign enthusiasm persists despite uncertainties out of the United States that some experts thought would make the local market less attractive. Such uncertainties include the U.S. Federal Reserve’s apparent intention to raise interest rates again, which normally would compel investors to pull capital from emerging markets like Korea and put it into the U.S. market, as well as Donald Trump’s protectionist trade policies, which could hurt export-centric economies like Korea.

Market insiders say that the weakened local currency more than compensated for such unfavorable conditions, at least for the time being.

“The effect of uncertainties from the Trump administration as well as the Federal Reserve’s January minutes all led the won to lose ground against the dollar, making short-term bets on won-based assets more attractive,” said Jung Sung-yoon, a fixed income analyst from Hyundai Futures Corporation. “The merits of investing in won-based stocks and bonds were clear in January and February and such favorable momentum was maintained until the end of February.”

Jung explains that with a Fed rate hike in March now almost certain, it is possible that the influx of foreign capital will start to slow. “Some of that is already reflected in the market,” Jung said. “In terms of the long-term market trend, we will have to wait and see speed of the Fed’s rate hikes.”

Economic retaliation by Beijing for the deployment of a U.S. antimissile system, also poses a threat to the local stock market as Korean companies in sectors that rely on export to China may suffer, some analysts say.

“As the Chinese government takes retaliation against Korea for its decision to deploy the missile defense system, investment risks in the affected domestic sectors and companies have grown,” said Cookie Han, an analyst from NH Investment and Securities in a report. “The cosmetics and F&B companies that have enjoyed the so-called ‘China momentum’ will see their investment merits undermined by the China risk.”